In the course of doing research for our active projects, SHRA researchers often come across articles from historic publications or find fascinating archival material that triggers a memory or provokes a question that compels us to further explore.

I recently had such an experience when researching in a historic issue of the Engineering and Mining Journal, a trade publication about various mining and metal working practices of the 1920s. After pages and pages of articles about mining and smelting operations in the zinc, lead, and copper industries, I came across an article, “Books in Coal and Metal Mining towns,” whose first page had a large black and white picture of what looked like a library. The article provide a welcomed break to the plethora of articles about the American metal industry that I had been reading for hours, and it also made me question what I knew about the role that public libraries have played in American history. How influential were these institutions in creating a sense of community? In the case of this unexpected article, what was their role in mining towns? And what about the fate of libraries now, in the digital age, where printed books are becoming, in some ways, a relic of the past? Here, as a lover of libraries and the “old book smell” that I associate with these grand institutions, I have attempted to answer these questions. 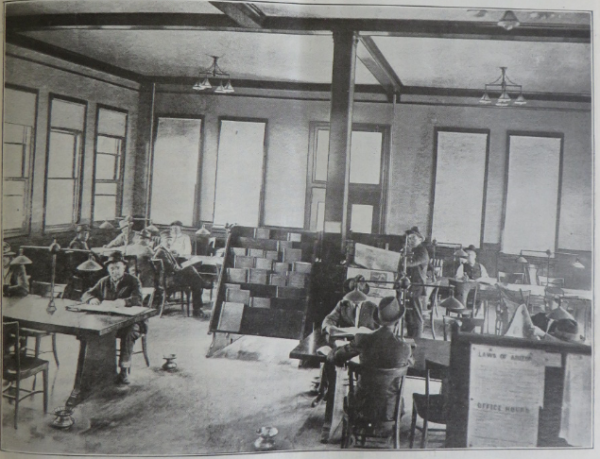 The Copper Queen Library, in Bisbee, AZ, circa 1920. Bisbee, Arizona was also home to the Queen Copper Mine, one of the largest and most prosperous copper mines in the world. Photo Credit: T.S. Da Ponte, “Books in Coal and Metal Mining Towns – A Real Need in Most Mining Communities for Libraries – American Library Association To Undertake an Enlarged Program in Providing Reading Rooms for Industrial And Mining Centers – Scope of the Work,” The Engineering and Mining Journal vol. 110, no. 5 (July, 31, 1920): 211-212.

Although printed books have been available for centuries, the history of public libraries in America dates back less than 300 years. Most scholars agree that the bureaucratic history of these public institutions begins with the founding of the American Library Association (ALA) on October 6, 1876, during the Centennial Exposition in Philadelphia, Pennsylvania, although a handful of libraries existed before this date. Benjamin Franklin created a subscription library in 1731 and the first free public library, the Peterborough (N.H.) Town Libraries, opened in 1833.[1] However, even though these limited institutions predate the ALA, the new professional organization did much to further the efforts of public libraries; the organization’s mission statement claimed to “enable librarians to do their present work more easily and at less expense.”[2] 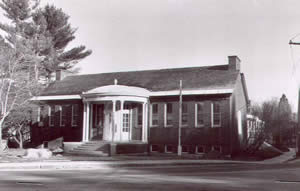 The Peterborough Library was established in 1833, and is credited with being the oldest free library in the world supported entirely by public funds. This structure was completed in 1883 and the Classical Revival style portico was added in 1914, at the bequest of the architect’s sister. Photo credit: New Hampshire Division of Historical Resource, NH State Register of Historic Places, Photographs & Descriptions.

By the 1920s, it was clear that the ALA had been busy at work expanding the function of libraries, all in an effort to reach more patrons. One of the ALA’s early founders, Caroline Hewins, was influential in creating children’s collections at the Hartford Library in Connecticut.[3] In addition to reaching patrons of all ages (and races and genders) through library collections, the ALA also instituted a bookmobile program to reach more remote patrons and recommended standard educational prerequisites for individuals entering the library profession, including 2-3 years of college education. 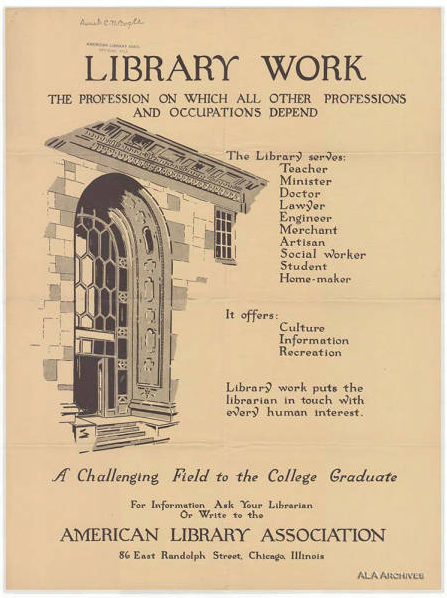 The ALA had various posters and campaigns to advertise the work they were doing. This post dates back to 1925 and encouraged young college graduates to join the librarian profession. Photo credit: “Library Work: The Profession Upon Which All Other Professions Depend,” 1925, American Library Association Archives Posters, University of Illinois at Urbana-Champaign. American Library Association Archives.

This history of the ALA’s effort to be inclusionary and reach patrons of all backgrounds is clearly displayed on the modern ALA website, and I was pleasantly surprised to see clear historical evidence of these efforts as I read the article about libraries in mining towns. It was the ALA who was pushing for more libraries, and they were pushing for citizens of the working class to have access to books! However, reflecting the assimilationist attitude of the times, the author of the article, T.S. DaPointe, reported on the good work of the ALA through a slightly xenophobic lens.  Da Ponte praised the ALA for recognizing that “a void existed in the lives of miners and mining engineers” which could only be filled “by the proper kind of books.” But Da Ponte also mentioned the language barrier, which posed a challenge for libraries in these mining communities, made up largely of immigrant laborers and their families. But here, the article claimed that the ALA proposed to “surmount this obstacle by urging the translation into foreign languages and publications of books which tell of American ideals and aims.”[4] By offering translations, the new citizens could “come to know us better” without waiting for the acquisition of English. While the “proper kind of books” the ALA had in mind in 1920 might seem a bit slanted by today’s terms, their efforts were meant to be inclusionary. In addition to these types of pro-American books, the ALA also suggested offering “special and technical books” so that miners could improve their knowledge of their industry and “acquire a broader outlook and become more efficient and capable of advancing the work” in which they were engaged.

The periodical and general reading room of the Copper Queen Library, in Bisbee, AZ, circa 1920. This library was maintained by the Phelps Dodge Corporation for employees, as well as Bisbee, Arizona residents. Photo Credit: T.S. Da Ponte, “Books in Coal and Metal Mining Towns – A Real Need in Most Mining Communities for Libraries – American Library Association To Undertake an Enlarged Program in Providing Reading Rooms for Industrial And Mining Centers – Scope of the Work,” The Engineering and Mining Journal vol. 110, no. 5 (July, 31, 1920): 211-212.

The extent to which the ALA was able to provide these types of books to mining and metal industries towns across the country is unclear; the article, unfortunately, did not feature a second iteration devoted to following the ALA’s efforts in this endeavor. But the organization’s role in promoting libraries and books in the 1920s made me think about the types of challenges that these types of communities face today, as well as the types of challenges facing America’s libraries.

These questions and more will be explored in the second installment of this blog series, so please check back in a few weeks to learn more about the legacy of America’s public libraries.

[4] T.S. DaPonte, “Books in Coal and Metal Mining Towns – A Real Need in Most Mining Communities for Libraries – American Library Association To Undertake an Enlarged Program in Providing Reading Rooms for Industrial And Mining Centers – Scope of the Work,” The Engineering and Mining Journal vol. 110, no. 5 (July, 31, 1920): 211-212.