Editor’s note:  This is the second installment in the blog series on history of the National Archives. Read the first installment here.

Fire drills used to always reminded me of middle school, where students filed out of the classroom in single-file lines to congregate at the designated meeting place. Excitement was usually the emotion that most students shared as they tried to hide whispered conversations with friends, all the while hoping that the drill would last long enough to prevent the teacher from giving a quiz on last night’s reading. This thought came to mind in the weeks following my emergency/fire evacuation experience at the Archives II in College Park, Maryland, which thankfully turned out to be nothing more than a drill. Back in the office, I was still intrigued by the questions that the fire drill prompted regarding fires at archival facilities.

It didn’t take long to learn about the devastation that fires have caused at numerous records facilities throughout the country. In fact, fires had affected the project that took the SHRA team to Archives II in the first place. In Record Group 122, the records of the Federal Trade Commission, the majority of the files we pulled contained a single sheet of pink paper informing researchers that the records originally contained within the folder had been destroyed by a fire in 1930. And yet, of all of the fires that have destroyed records held at federal buildings, including some incidents which date back to the early 1800s, the most devastating fire actually happened rather recently, in July 1973 at the National Personnel Records Center in Overland, Missouri.[1] 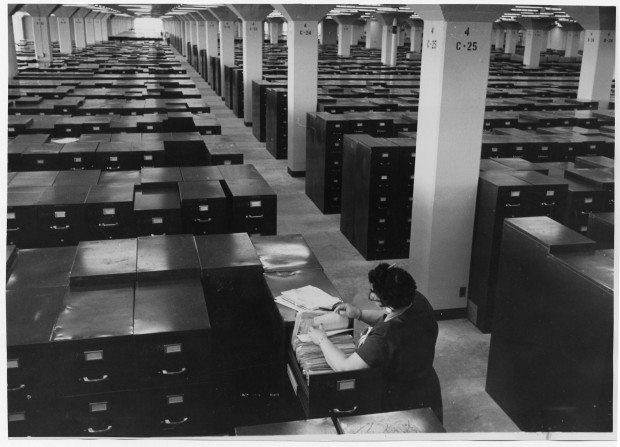 The facility was completed in 1956, and housed the military and civilian service records of all federal government employees, yet the building’s design lacked something which almost all modern public buildings now have: a sprinkler system.[2] Also lacking in the design were sufficient firewalls and smoke detectors, something which, by the 1970s, had sparked concern among the facility’s staff; and their fears were warranted because at 12:16 am on the morning of July 12, 1973, the North Central County Fire Alarm System, Inc. received notice of a fire at the facility. Within 4 minutes firefighters had arrived on scene, and yet, despite the firefighters’ timely arrival, the fire blazed for nearly 22 hours and eventually required the participation of 42 fire districts, whose efforts to extinguish the fire included dousing the building, and the records held within, with millions of gallons of water.[3] 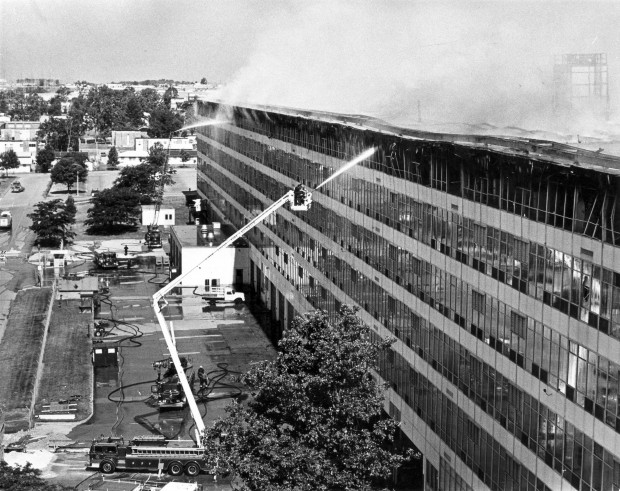 Efforts by firefighters to put out the blaze required them to douse the building with millions of gallons of water. Photo Credit: Source: Post-Dispatch Photograph

In the aftermath of the blaze, the staff was most concerned with salvaging records that had received extensive water and fire damage. Their immediate efforts resulted in the recovery of nearly 6.5 million burned and water damaged records. In all, the fire destroyed approximately 16-18 million Official Military Personnel Files of the Army and Air Force, and this disaster is considered unparalleled in terms of the “loss to the cultural heritage of our nation.”[4] 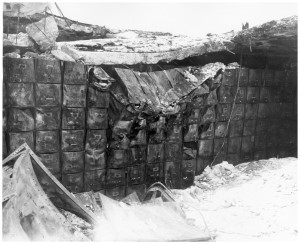 The records held in filling cabinets continued to burn for 3 weeks. Each time one was opened, the exposure to oxygen would reignite the material. Photo Credit: U.S. National Archives,

Learning about the devastating fire at the National Personnel Records Center has undoubtedly changed my perspective on fire drills. Fire drills should not incite excitement nor frustration. They should be seen for what they are – a good thing, especially at a facility that houses a very large portion of the country’s written (and flammable!) records.  It makes me glad to know that Archives II not only executes fire drills but that the facility’s staff takes them very seriously. I also now have a better appreciation of the importance of such drills not only for the safety of researchers and staff who occupy the building, but also because these drills represent part of the lengths that the National Archives institution now goes to in preparing for and in attempting to prevent the loss of our nation’s written records from the devastating effects of fire.