11/4/15 – Teaching Business with History: A Case Study on Garrett Freightlines

Idaho’s history is rich in many ways, but one facet of the state’s history that seems to strike a particular chord with me is the history of its abundant legacy family businesses. I first came across this history as a graduate student at Boise State where I focused my thesis research on the history of Boise’s oldest construction company, Jordan-Wilcomb Construction, and its role in creating a sense of place and contributing to the city’s built environment. Jordan-Wilcomb is one of many such companies that have affected Idaho’s economic history and community development. Another company worth noting is Garrett Freightlines. 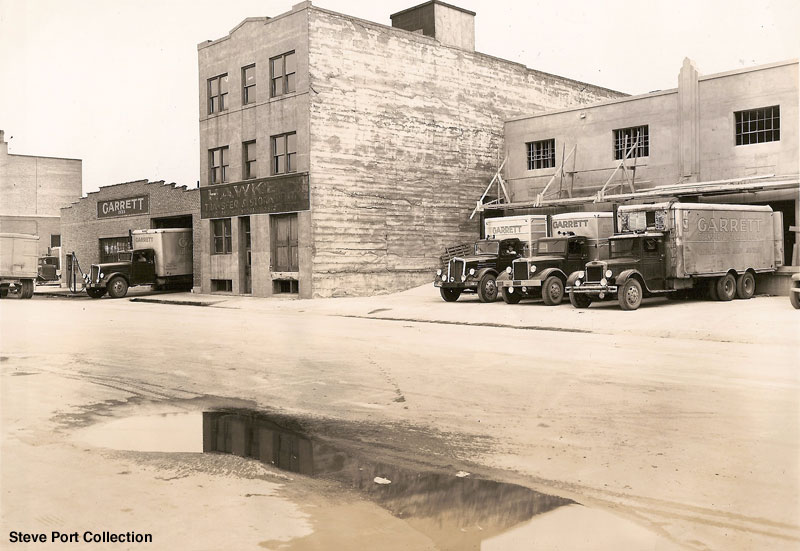 Garrett Freightlines, a Pocatello based legacy business began in 1913. Pictured here is their Pocatello facility in 1939. Credit: Steve Port Collection

Garrett Freightlines began business in 1913 when brothers Oscar and Clarence Garrett purchased a truck, a rare commodity in those days, to take advantages of the opportunities in the hauling and baggage business in the small railroad town of Pocatello.[1] Over time, the company grew its network of lines to other Idaho towns, and in 1934, it added a milestone route to Los Angeles. By the early 1960s, Garrett had acquired previously established transportation companies and grown the business to more than 67 terminals across the West, boasting 3,500 trucks to serve the needs of customers.[2] In the midst of decades of growth, company president Clarence Garrett never imagined moving company headquarters from the original Pocatello home base. However, by the late 1970s, following Clarence’s death, stockholders sold Garrett Freightlines to Denver-based American Natural Resources, ANR, who quickly dismantled the Pocatello facilities. With this decision, a company whose history spanned eight decades and whose presence shaped and influenced Pocatello’s economic and social development unfortunately ceased to exist.[3]

Before Pocatello became the hub for long-distance hauling, the town was a major railroad center. Credit: Idaho State Journal

Although this particular business had not been on my radar as a result of graduate school studies, or even due to current SHRA research, an article in the Idaho Business Review about the company’s legacy spurred my interests for a variety of reasons. As a historian, I always appreciate journalists who report on history. But the article also documented how Idaho State University Business Professor, Alex Bolinger, Ph. D., utilized Garrett’s history to teach students about the history of changing business cultures. Bolinger’s study provided his students an opportunity to collaborate with each other while enhancing their analytical skills and learning about one of Idaho’s great entrepreneurial stories.[4]

Not only did Bolinger utilize the history of Garrett Freightlines as a case study, but he also encouraged his students to fully immerse themselves in the field of history by conducting archival research and oral histories. Bolinger, whose grandfather had worked with the company, possessed boxes of significant photos, documents, and mementos from his grandfather’s tenure with Garrett Freightlines.[5] Bolinger asked his students to mine those materials for relevant documents as well as conduct research in Oboler Library’s Special Collections and oral history interviews with former Garrett Freightlines employees, many of whom still reside in Pocatello.

As the idea for this class project progressed, Bolinger envisioned a final term project that veered away from the traditional final exam. He was inspired by a visit to the Model T museum housed in Detroit’s original Ford Plant, where he found history books published by Arcadia Publishing in the gift shop. Bolinger realized his class could create a book on transportation history in Idaho, with Garrett Freightlines as a central feature. Most students received the book idea with excitement. Bolinger hoped the project would push students outside of their comfort zone, which he believes “is where a lot of great learning happens.”[6] The professor explained that he hoped the students’ biggest take away was that true innovation “doesn’t have to come from Silicon Valley or the big metropolitan centers of the country,” but instead, that “entrepreneurs and managers who are proactive and willing to collaborate can change an industry and thrive anywhere.”[7] The results of Bolinger’s students’ efforts have come to fruition, and Arcadia Publishing released the Garrett Freightlines book in May 2016.

By mid-century Pocatello based Garrett Freightlines operated terminals across the west, much like this Spokane, Washington terminal. Credit: Steve Port Collection

While much of the research I conduct as a member of the SHRA team involves researching environmental history, the importance of celebrating, commemorating, and recognizing businesses and their importance in history does not go unnoticed at SHRA. Check out our website for information on the other business histories and public history projects we have worked on recently.