The American metal industry and public libraries have a fascinating and intertwined history. Glimpses into this rather unexpected historical narrative can be explored in the two previous installments of this blog series, available here and here. But nowhere is the connection between these two entities more pronounced than in the philanthropic work of Andrew Carnegie.

Andrew Carnegie made his money in iron and steel – and he made millions. At the height of his working life, he bridged the gap between the Age of Iron and the Age of Steel.[1] His tactics forever changed the way that the American metal industry worked. By instigating a palpable sense of competition between his workers, metal work became speedier, more efficient, and more productive under Carnegie, and required less skill and talent. He amassed millions through this transformation.

Andrew Carnegie, known as a resolute captain of industry, a champion of peace, and a great founder of libraries.” Photo credit: Carnegie Library of Pittsburgh.

While Carnegie’s influence on the American metal industry was unquestionable, so too was his influence on American libraries. Carnegie sold his steel empire to J.P. Morgan in 1901 for $480 million, making Carnegie the world’s richest man. Immediately after this transaction was final, he began to give his fortune away.[2] In all, Carnegie donated $350 million. However, he was not a man who believed in “charity”; instead he wanted to help those willing to help themselves. His gospel, which developed over the course of his adult life, stressed that it was an “obligation of the wealthy to give away their money for the public good,”[3] and so, Carnegie, who had since childhood embraced knowledge and learning, donated libraries. 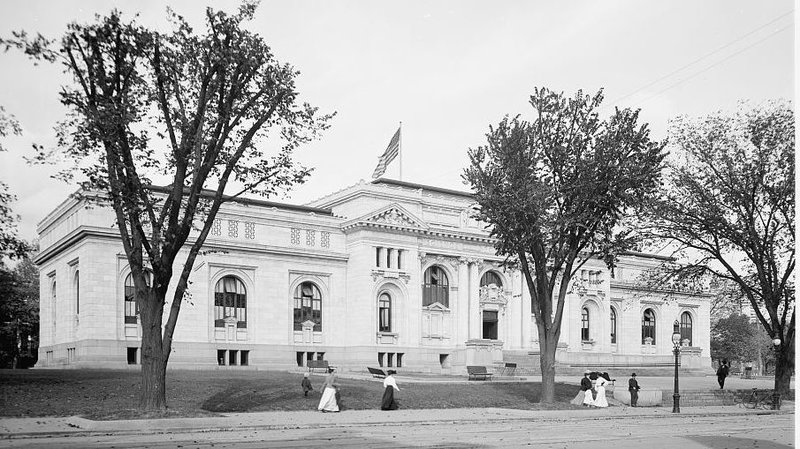 The Carnegie Library in Washington, D.C., opened in 1903, was one of the only public buildings where African-Americans could use the restroom. Photo credit

Of the fortune that went to the public good, $60 million funded 1,689 public libraries across the country. The foundation of Carnegie’s library mission was that these institutions were to be “pioneering, public, and free.” In other words, they were to be seen as necessary community institutions, where the community who helped Carnegie earn his millions, could go and learn and improve their own lots in life.

The gift of a Carnegie Library included only the building. It was up to the community to provide funding for upkeep and operations. As a result, some of these grand structures eventually fell into disrepair and had to be demolished.[4] And while many of Carnegie’s iconic library buildings (some still in use as libraries) dot American small towns and cityscapes, another iconic library – The New York Public Library – whose branch libraries Carnegie funded — has recently faced challenges that threaten the institution’s mission and daily operations.[5] 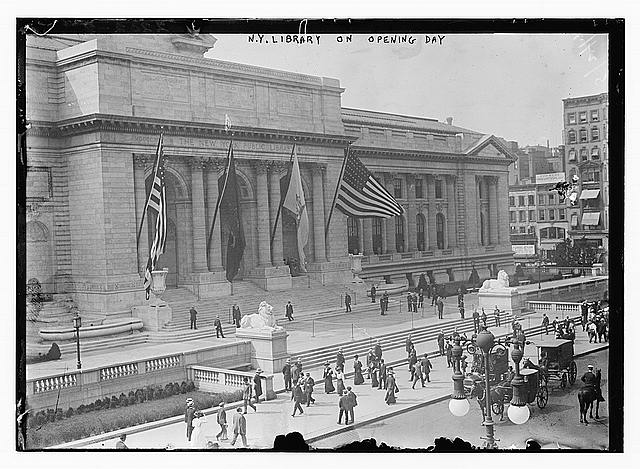 Although the name implies that this institution is a part of the New York state-sponsored system of libraries, it was in fact created as a private, non-profit institution, and it has been managed by a board of trustees since its creation. The New York Public Library (NYPL) formed as part of a merger between the Astor and Lenox libraries and the Tilden Trust on May 23, 1895;[6] however, the library’s architecturally stunning building did not open until May 23, 1911.[7] The majestic building, designed by Carrère and Hastings, included seven floors of stacks, an enormous and elegant reading room, and one of the world’s most efficient book delivery systems. Although the library has severed the needs of millions of patrons over the past 100 years, the library’s financial footing has proven much weaker than the iconic building’s concrete foundation.

In 2007, the NYPL’s board of trustees attempted to modernize the facility in order to bring in additional revenue. Despite the metaphoric protection provided by the iconic lions sitting abreast of this architectural landmark, aptly named “Patience and Fortitude,” the lions did little to protect the library from the board’s recent efforts. The library’s plan to modernize included removing the three million books from the library’s stacks so as to transform those seven stories into areas where patrons could “sit, sip coffee and read digitized books on their e-readers.”[8] Luckily, the board’s plans were defeated after the public became aware of what “modernization” would do to their beloved landmark. However, in the process of removing and returning three million books, many of the historic tomes are now missing.

An image of the NYPL, northern most lion, “Patience.” Photo credit

In an effort to remedy the damage done in 2007, the board of trustees is considering new plans that include updating other branch libraries, and bringing books housed at those locations to the NYPL main branch. This plan in conjunction with the idea to build additional on-site storage under Bryant Park will not only bring books currently in storage back the library but it will allow the institution to repurpose previously unused library space. These changes will allow the library to fulfill its role as a research institution and allow the institution to better promote the collections and services of the NYPL’s Science, Industry, and Business branch library, currently located on 34th Street. As historians who visit research repositories on a fairly regular basis, and who research about the history of American industries, the SHRA teams hope that the NYPL will be able to find the books that have been misplaced by the time the city and library trustees are ready to take action on this new, and more thoughtful plan.[9]

America’s public libraries have touched patrons from all races, ethnicities, classes, and backgrounds; and these institutions have done so for well over 100 years. Carnegie provided millions of patrons across the country with access to knowledge and learning; and the NYPL’s lasting influence on its patrons was clearly evidenced by the public’s efforts to save its beloved library and protect the institution and its purpose. However, what makes the history of these institutions unique lies in its connection to other historical narratives about industry, community development, and philanthropy, making the legacy of libraries relevant well into the 21st century. Libraries are, as Carnegie believed, necessary community institutions, but they also act as “timeless repositories of treasures,” and for many, they hold fond memories.[10] But when the history of America’s public libraries is viewed alongside the history of the American metal industry, the stories that these institutions tell become that much richer and complex.

We hope you enjoyed SHRA’s blog series on public library and hope you check back to see what other interesting historical narratives the researchers at SHRA are writing about!

[2] “How Andrew Carnegie Turned His Fortune Into A Library Legacy,” NPR

[5] “Andrew Carnegie,” biography.com; Carnegie donated $5 million to the New York Public Library in 1901 so that the institution could expand and open several branch libraries. This funding went to the construction of the buildings and was contingent on the NYPL providing the sites and the libraries’ operation and maintenance.

[8]  “Patience and Fortitude and the Fight to Save NYC’s Storied Public Library,” NPR

[9] Jessica Gould, “New York Public Library Gets Ready For Its Next Chapter,” WNYC