Recently, the SHRA research team had the opportunity to visit Santa Anita Park, a horse racing venue in Arcadia, CA.  They saw a statue of Seabiscuit, an unlikely champion thoroughbred whose last triumphant race was run there on March 2, 1940.  The race, the Santa Anita Handicap, had a purse of $125,000 and Seabiscuit had run it twice before – in 1937 and 1938 – and had been narrowly bested in each of those races.  Coming off on ruptured tendon suffered in January 1939, Seabiscuit’s return to racing and finally winning the Santa Anita Handicap was the fairy-tale ending to a scrappy and unlikely career that had completely captured and fueled the American imagination as the country limped through the Great Depression.  The statue was completed and installed in what seems like record time, in February 1941. 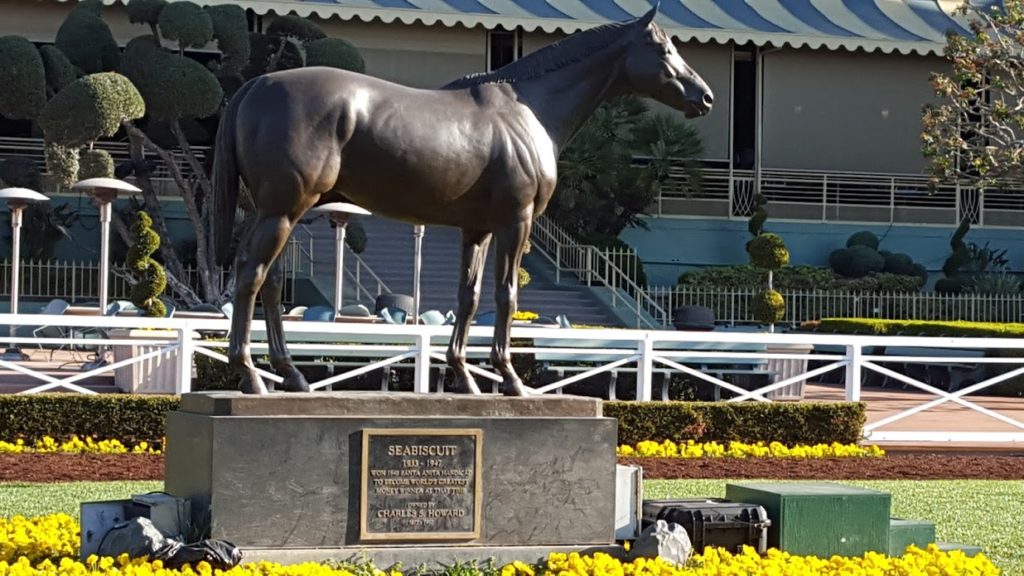 This snapshot of Santa Anita history had spurred my interest about what had happened at the track since Seabiscuit’s epic win, and while conducting some online research, I came across a photo of the statue from April 1942, depicted below. 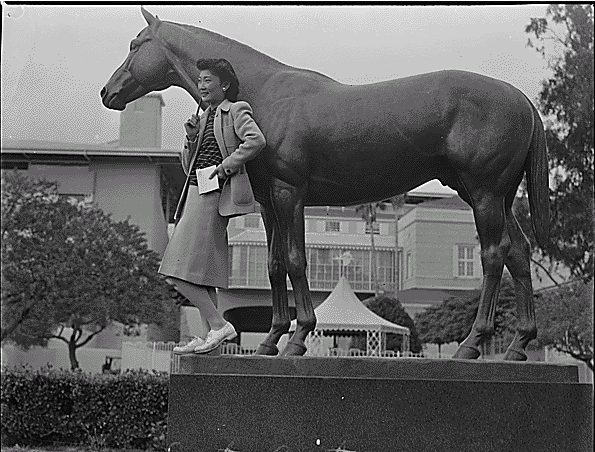 I wondered, how did this racetrack go from the site of such a triumphant horse race to the largest staging area for Japanese interment?

After Japan’s bombing of Pearl Harbor on December 7, 1941, President Roosevelt signed Presidential Proclamation 2537 on January 14, 1942, which required the registration with the Justice Department of “aliens of enemy nationality,” which at the time meant people of German, Italian, and Japanese citizenship.  Just a month later, the president would sign Executive Order 9066, which paved the way for the internment of American citizens and residents of Japanese descent on the west coast of the U.S.  The U.S. government, however, needed time to build these camps and, in the interim, the detainees were held in various assembly centers in several western states.  Due to their size and capacity, fairgrounds and race courses were often the sites of these assembly centers.

A month after FDR signed the Executive Order, internees began arriving at the Santa Anita assembly center.  They were housed in converted horse stalls and quickly assembled barracks.  Santa Anita Park would be home to nearly 20,000 internees between March and October 1942, when the internees were relocated to hastily built camps in several states including Idaho, Washington, Oregon, California, Colorado, and Arkansas.

What was life like for the internees at Santa Anita racetrack?  To start, many of the more than 8,000 housed in converted horse stalls said that the stench of horse manure never quite went away.  The tar paper barracks were sited on Santa Anita’s parking lots in close proximity to one another; there would have been little about these structures that seemed like a home.  The government provided each internee with the barest of essentials: a camp cot, a straw tick and a blanket.  Barbed wire surrounded the site and search lights played across the camp each night.  One possible green space for the internees, the track infield, was converted to a giant garden to grow supplemental produce for those sequestered at the Camp. 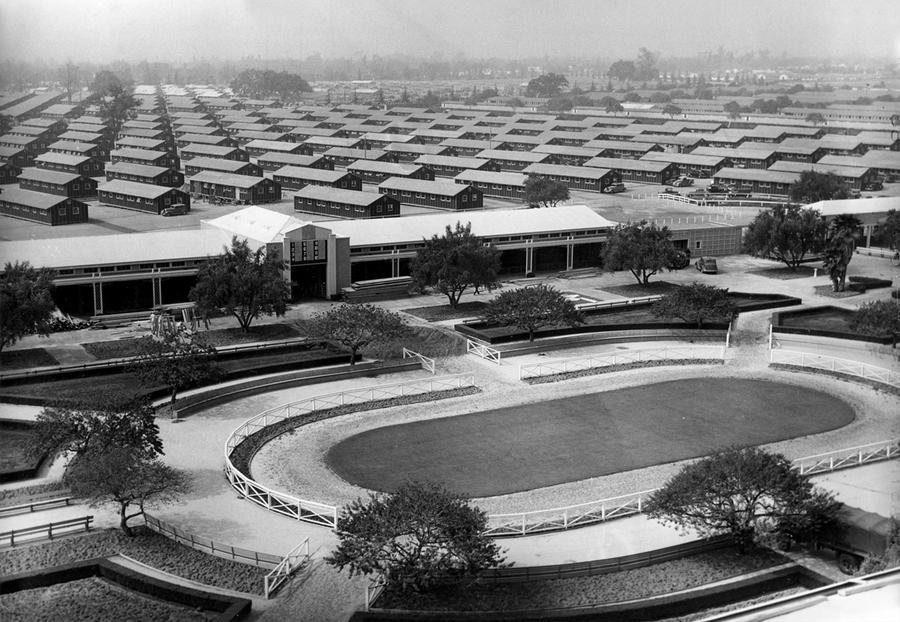 Much of one’s time spent in camp was in line.  The mess halls were insufficient to meet immediate demand, and it was not uncommon to have to stand in line for more than an hour to get a meal.  Likewise, shower and rest room facilities were woefully inadequate.  Until the summer, there were approximately 150 showers for a population that pushed 18,000.  Eventually, more shower houses were constructed, but even with the new facilities, there were roughly thirty people for every shower head in camp. 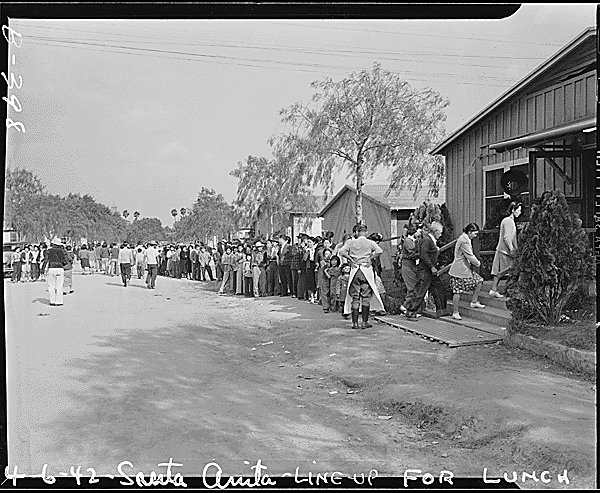 Despite the privations, the Japanese Americans continued to practice their professions as they could, meaning that there were doctors, teachers, cooks, and others providing their essential services while held at the racetrack.  The U.S. Army had made no formal provisions for the education of the detained children, so a cadre of teachers was drawn from the adult internees.  Efforts were made by those interned to keep their spirits up and there were scores of softball teams, several scout troops and other social clubs that formed over the few months that Camp Santa Anita was in full operation as an assembly center.

Once the last of the internees had been transferred, Santa Anita was converted to an Army training base.  Known as Camp Santa Anita, it would become the largest ordnance training center on the west coast.  Racing would not resume at the park until after victory was declared in Europe, in May 1945.

Today, the only trace of Santa Anita’s history during World War II is a memorial plaque, which you can see an image of below.  Despite the track’s return to its original purpose, SHRA’s researchers were struck by the location’s history during the 1940s and wanted to illuminate more fully the information contained on the memorial. 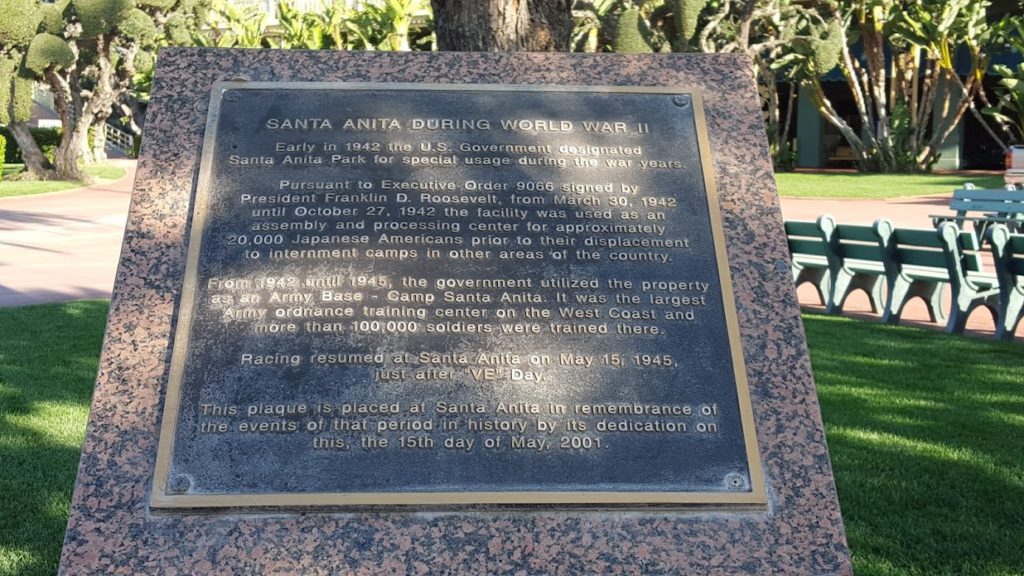 OurDocuments.gov, “Transcript of Executive Order 9066: Resulting in the Relocation of Japanese (1942).”