7/6/16 – Chronicling the Sinking of the Titanic

You’ve heard it screeched on playgrounds, bellowed at parties, and parodied all over the internet. “I’ll never let go, Jack!” It’s the iconic line Rose (played by Kate Winslet) calls out to her beloved Jack (played by Leonardo DiCaprio) in James Cameron’s 1997 movie Titanic. Almost 20 years on, the line — and the movie — remain an important American cultural reference point. The only thing that eclipses the line is the actual sinking of the Titanic, which 104 years later, still fascinates the public at large. 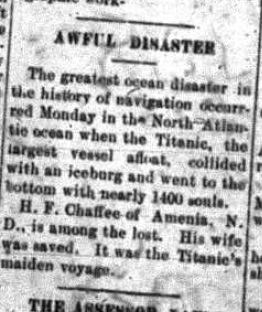 This past spring, while conducting newspaper research in a rural North Dakota newspaper, I stumbled upon an article that reported on the sinking of the Titanic. What fascinated me about the article was the lack of fanfare. Historic newspapers provide excellent information about the daily happenings of any given locale. However, as any historian will tell you, historic newspapers also had a tendency to wax poetic and make grandiose the simplest of news stories. Thus, I was surprised that the article reporting on the sinking of the Titanic was so brief. Other news stories, which discussed a new assessor law and the worthlessness of the spring flax seed, dwarfed the reporting on the Titanic. The paper’s treatment of the Titanic’s sinking evoked many questions. Perhaps the lack of readers in this sparsely settled area didn’t necessitate much coverage? Or, was it feasible that the weak cultural ties between England and North Dakota resulted in a lack of coverage of the sinking of the world’s largest unsinkable ship? While I didn’t have the time to go and fully investigate such questions, the pithy article intrigued me enough to head over to the Library of Congress’s Chronicling America database, which allows researchers to conduct key word searches in newspapers that were published in towns all across America, to see how other newspapers reported on the infamous sinking. I found numerous articles that told of the notorious iceberg, frigid water, sunken treasure, and the 1,500 lives lost. But, what surprised me the most was that other North Dakota newspapers, including the Grand Rapids Evening Times, recounted the Titanic’s sinking in extraordinary detail, which only shrouded the article I initially found in more mystery. 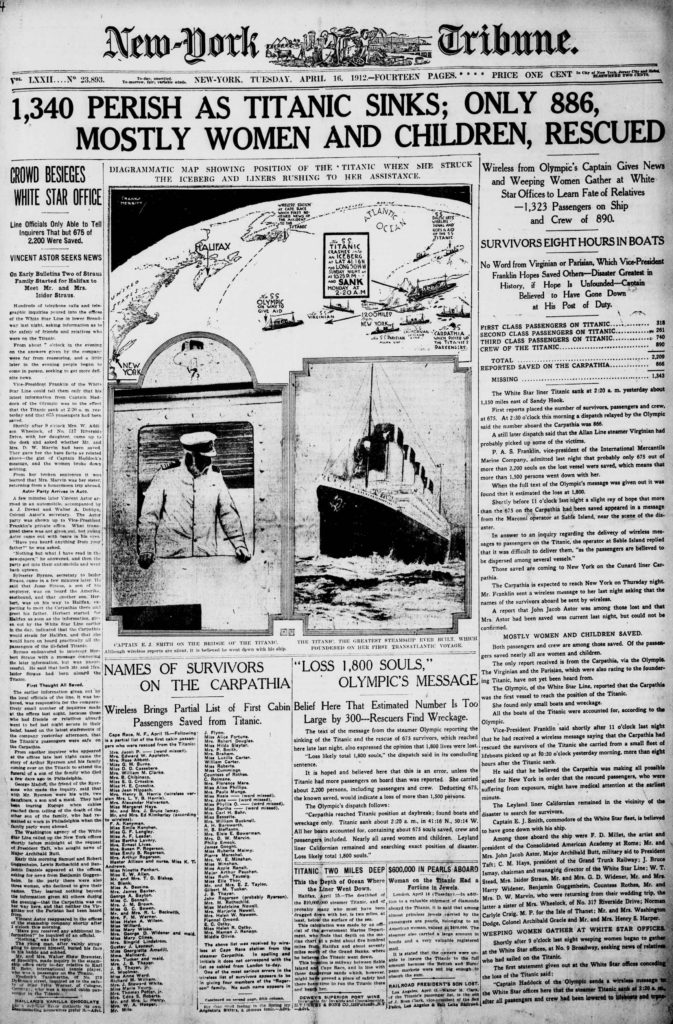 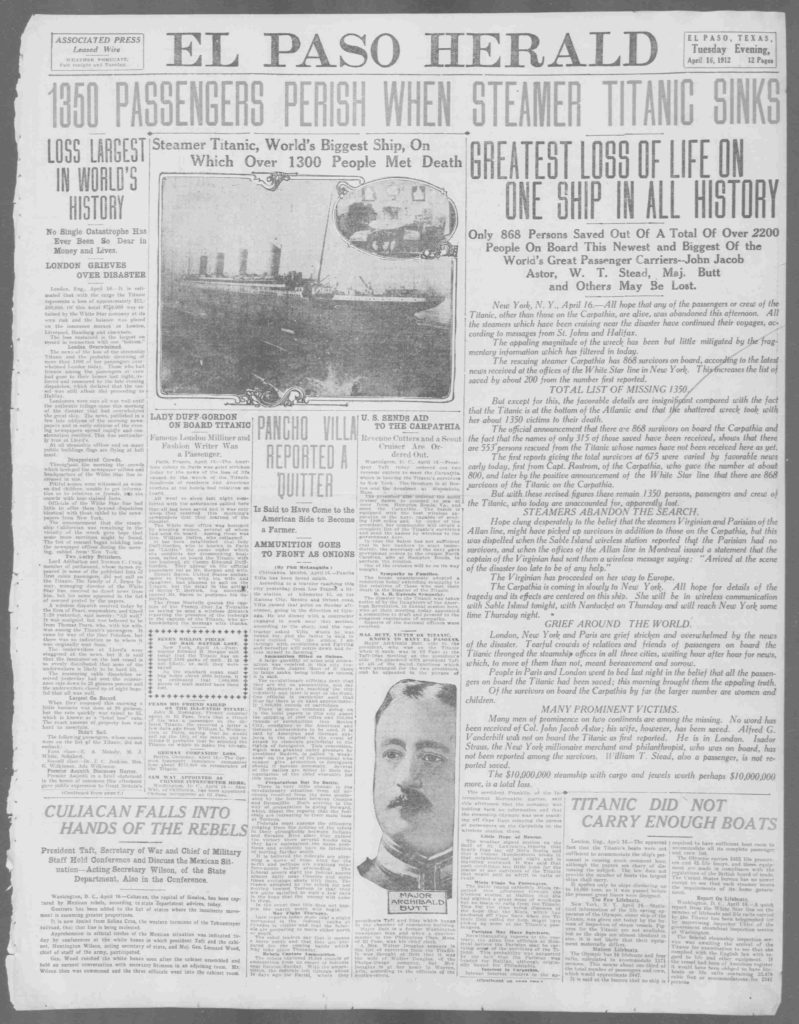 Despite what the rural North Dakota newspaper I was conducting research in might suggest, the Titanic still captivates. In fact, in an April 2012 New Yorker article one historian exclaimed that that “the three most written-about subjects of all time are Jesus, the Civil War, and the Titanic.” Hyperbole aside, the American public’s fascination with the Titanic is undeniable. Both National Geographic and the Smithsonian Magazine have multi-media and full length stories that go into intricate detail on the sinking of the Titanic. Moreover, every April, like clockwork, news outlets of all shapes and varieties commemorate the Titanic in new and interesting ways. And so, perhaps therein lies why the “I’ll never let go!” line remains vibrant in our national dictionary – We really can’t let go of the Titanic and all of its allure. 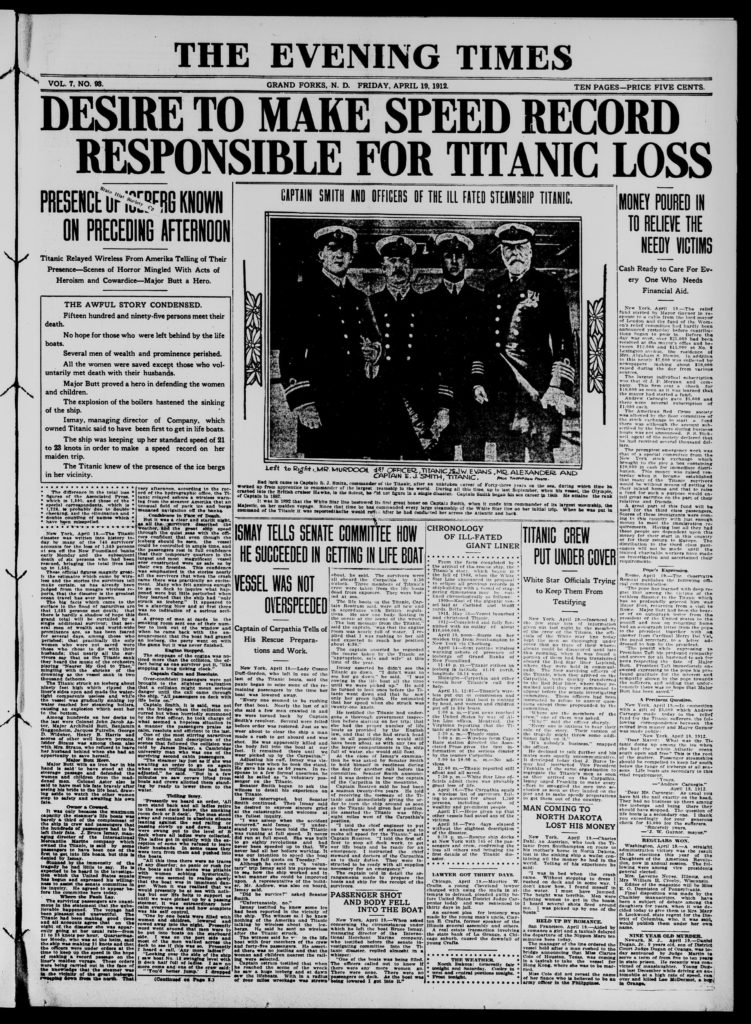