Fanfare, Glory, Spectacle: The opening ceremonies of the Olympic Games invite spectators to lose themselves in a state of suspended disbelief, even if for the briefest of moments. The combination of music, lights, and the palpable excitement at the most recent Rio Olympics filled the arena as the event commenced. This opening event and the hyped-up presentation of the host country’s history is not an original element of the Olympic Games, and its beginnings were fraught with controversy. This blog traces how the opening ceremonies have evolved over the past 100 years. 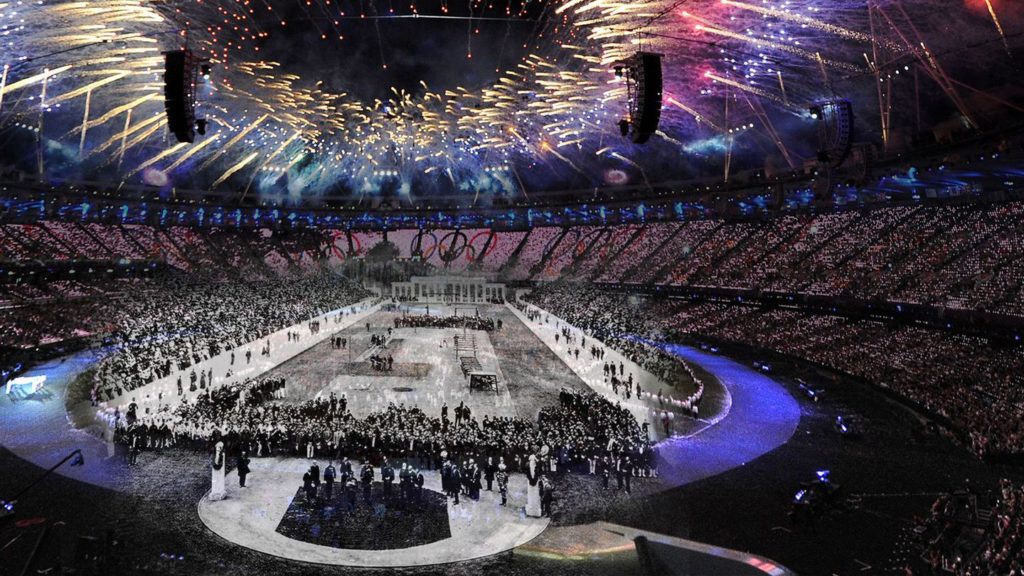 The first blog in this series, available here, describes the history of the modern Olympics. The concept of a grand opening display that offers an opportunity for visually exciting patriotic celebration while showcasing symbolic elements of the Games has developed over time. The 1936 Olympic Torch Relay displayed an early example of opening ceremony spectacle in Berlin. The International Olympic Committee nominated Germany to host these games as an effort to signal “Germany’s return to the world community after defeat in World War I.”[1] Adolf Hitler conceived of the relay amidst global concern over his country’s discrimination and persecution of Jewish-German athletes. However, the pageantry of carrying a torch from Olympia, Greece to Berlin, Germany only perpetuated Nazi propaganda and the “racial myth that superior German civilization was the rightful heir of an ‘Aryan’ culture of classical antiquity.”[2] Yet, despite the relay’s nationalistic and racist beginnings, it has morphed into an expected ritual of the modern Olympics that recognizes exceptional athletes and historically relevant world citizens, while contributing to the display of the opening and closing ceremonies. 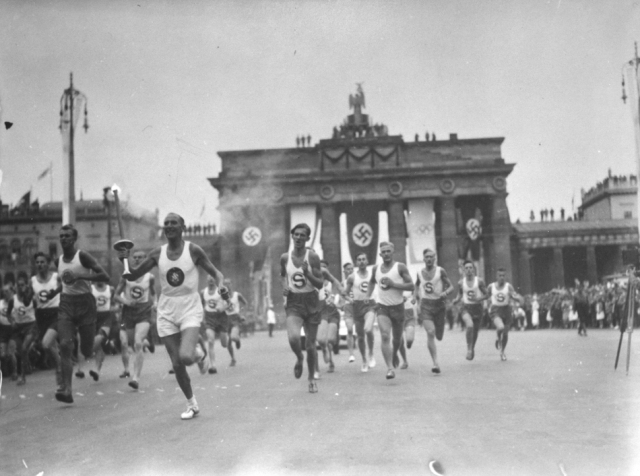 As the symbols of the modern Olympics emerged, so too did the tradition of an “opening ceremony.” Since the first official opening ceremony at the Antwerp Games in 1920,[3] the demonstrations have become more elaborate and more expensive, as host countries attempt to outperform their predecessors.

However, in the most recent Rio Olympics, the organizing committee faced budget challenges as well as infrastructure challenges. Not only were the doors into the main stadium too small to bring in large equipment to be used in the ceremony, but Brazil’s severe economic recession created financial challenges for the organizers of the event.[4] Despite these challenges, the committee managed to choreograph a visual display of Brazilian history using an advanced light projector. But the opening ceremony conveyed a romanticized history, especially when viewed with the American news commentary. 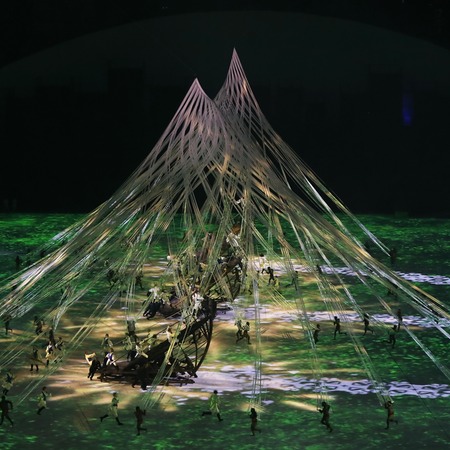 During the opening ceremonies, many viewers turned to twitter to comment on the spectacle and Brazil’s decision to incorporate the country’s history of slavery as part of the display. Photo credit.

The visuals, choreography, and story of the Rio opening ceremonies indicated that Brazil acknowledged the significantly negative environmental and social consequences of the county’s past, such as mass deforestation. However, NBC commentators made the mistake of calling the Portuguese colonizers “immigrants” instead of recognizing Brazil’s attempt to highlight its history from the indigenous people’s viewpoint, one that saw the Portuguese as colonizers. Thus, the American media’s lens conveyed “the gap between the colonized worldview and that of the colonizers.”[5] This commentary constituted a prime example of revisionism that muddled the history that Brazil was trying to acknowledge. The American media thwarted organizers’ attempts to factually portray a version of Brazilian history that recognized the realities of slavery and colonialism from both social and environmental perspectives.[6] 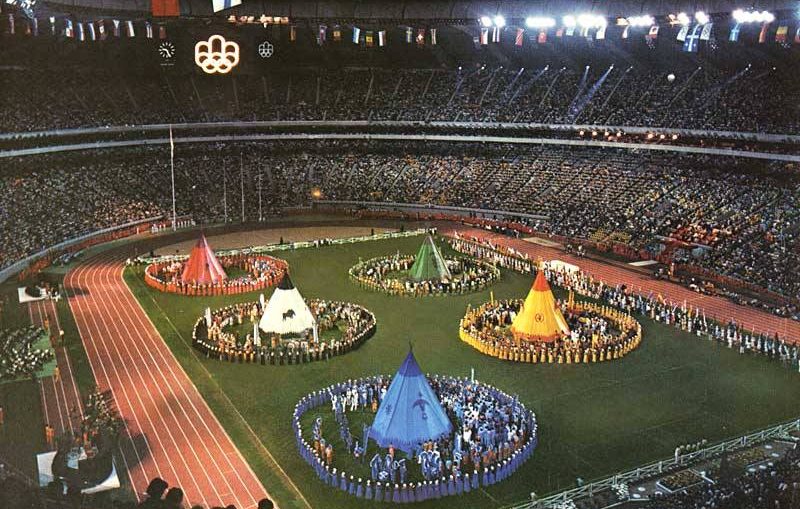 Other countries have also struggled to display their heritage during the ceremonies in a way that recognized the past without cultural appropriation or misrepresentation. On more than one occasion, Canada struggled to respectfully represent the culture and history of its native population during the Olympics. During the 1976 Montreal games, organizers planned to include Native dancers in the closing ceremonies, marking the first time that a country included native North American people in an Olympic ceremony since 1904, when their inclusion was only meant to reinforce the stereotype of the “savage” Indian.[7] Despite the passage of 70 years, organizers were more focused on the theatrics of the display than on the true representation of Canada’s First Nations. As such, the plans included using mass manufactured, color-coordinated “native attire” as opposed to true regalia, as well as 250 non-native dancers participating alongside representatives of Canada’s First Nations.[8] While many of the Native participants recognized their participation as misrepresentative of their true native cultures, they also understood that by participating on the world stage they were exercising their agency and advocating for their own political rights.[9] 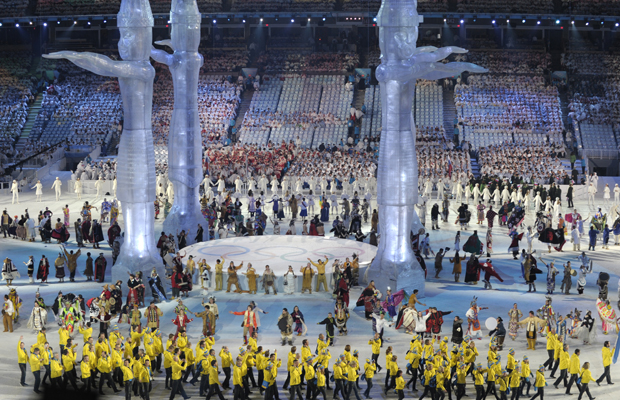 Nearly 40 years after the Montreal games, the organizers for the Vancouver Olympics seemed to have learned from their countrymen’s mistakes. The native participants for the 2010 Vancouver Games wore true regalia and danced their traditional dances; however, the importance of the spectacle in the ceremonies was not completely lost on the Vancouver organizers, who included visual elements like giant Totem poles dancing alongside the Native participants to tell a somewhat romanticized version of Canadian history. And yet, the challenges that the Vancouver organizers faced are challenges that public historians face today. There are acute difficulties associated with balancing truthful representation and analysis, and in creating content that is engaging for a public audience.

The Olympics are a major disrupter for any city or region that hosts them, and the opening and closing ceremonies have become a vital component of experiencing this worldwide event. Given the anticipation, excitement, and jubilation that accompany the games, one has to wonder, what becomes of the built environment that played host to thousands of athletes and spectators once the medals have been awarded and excitement has died down? In short, after the world leaves, what happens to the empty stadiums and the ghost-like Olympic Village? For answers to these questions, check back soon for the final installment in this blog series where I will explore the environmental history of the Olympics.

[3] “The Ceremonies of the Olympic Games,” olympics.mu

[5] Noor Al-Sibai, “The Opening Ceremony Addresses Slavery & Colonialism, And It’s Something The US Could Learn From,” bustle.com