As a research historian with SHRA, I have been fortunate to travel to some fascinating places for work. A recent research trip took me to The Huntington Library in San Marino, California. Unlike other repositories that I have visited, The Huntington Library is a privately held, non-profit institution that boasts not only myriad collections and rare books, but also an expansive botanical garden and art collection.[1] My short stay at this unique facility sparked numerous questions about the institution’s founders, how and when the institution came into existence, and its original purpose and use. 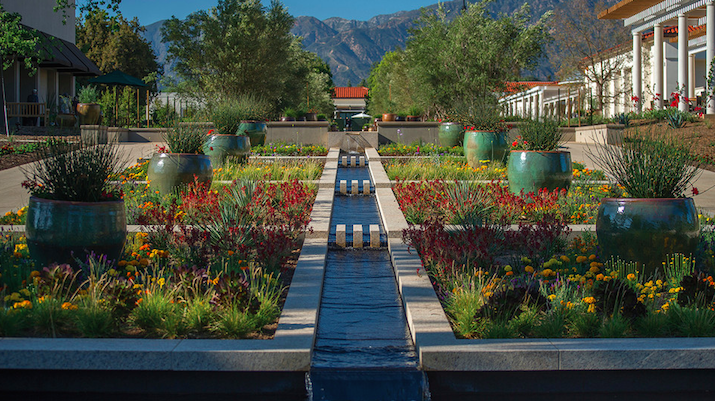 The view as one enters The Huntington Library grounds, 2016. Source.

In the late 19th century, the San Gabriel Valley’s San Marino consisted of but a few large ranchos and their surrounding residences. It was during this time that Henry E. Huntington, future owner of The Huntington Library and Gardens and nephew of the great railroad tycoon Collis P. Huntington, first learned of the area. During a visit in 1892, Huntington stayed at James DeBarth Shorb’s rancho and fell in love with the region’s beauty. He also recognized southern California’s business potential. Shortly after the turn of the century, Huntington’s intrigue with the region led him to relocate to Los Angeles, and in 1903 he purchased the property that had belonged to the late Shorb, along with the nearby Wilson Ranch, outside of what became the city of San Marino.[2] Together, Huntington spent $328,433.14 on these two properties, which in today’s dollars amounts to more than $8.4 million.[3]

Huntington, like his uncle, had been very successful in the railroad business, and his investment in the Shorb and Wilson ranches marked the beginning of his efforts to invest in and develop southern California. He wasted no time in dedicating both time and money to this endeavor, and within five years, the Los Angeles Herald was praising Huntington’s commitment to his newly adopted home town. The article noted Huntington’s modesty, and the roles he played as builder, financier, manager, “not to mention all that it means to have the ability to look ahead and consummate undertakings…that bring prosperity and better living not alone to one man, but to thousands.”[4] In addition to speaking highly of Huntington’s character, the article explained the importance of Huntington’s contribution to building Los Angeles’ transportation infrastructure, as well as his numerous corporations dedicated to the region’s real estate development.[5] These sources paint a picture of an accomplished man and valued Angelino, but Huntington’s legacy extended beyond his business ventures to include philanthropic efforts and support for the arts and humanities. 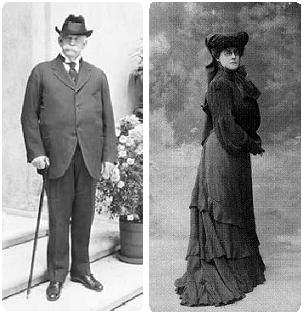 Pictured above are Henry E. Huntington, and his wife, Arabella Huntington. Photo credit: The Huntington Library, reprinted by Amelia Martinez, 2013.

By 1909, Huntington was beginning to make great strides in improving the Shorb and Wilson ranches, turning the property into what would become his Los Angeles home. Despite his alleged modesty, Huntington’s plans for his personal property were grandiose to say the least. Local newspapers described Huntington’s new home, which cost roughly $150,000 to build, as a “good sized hotel” that boasted views of Catalina and the Pacific Ocean.[6] The building’s most unique feature, however, was that it was fire proof. Huntington deemed this costly feature essential because he planned to house his extensive personal library in one of the wings of his mansion.[7] Local papers estimated that the library’s value was at least $500,000. In addition to his treasured books, Huntington possessed a large collection of paintings and some of America’s finest photographs, which he also planned to move from their previous location in New York to his San Marino property. These same newspapers also described the exterior landscaping and gardens surrounding the Huntington Mansion as beyond compare. The plans for the grounds called for the plants and flowers that lined the property to include exotic species from around the world, with an estimated value of $100,000, as well as a wide assortment of roses for his English-inspired rose garden.[8] 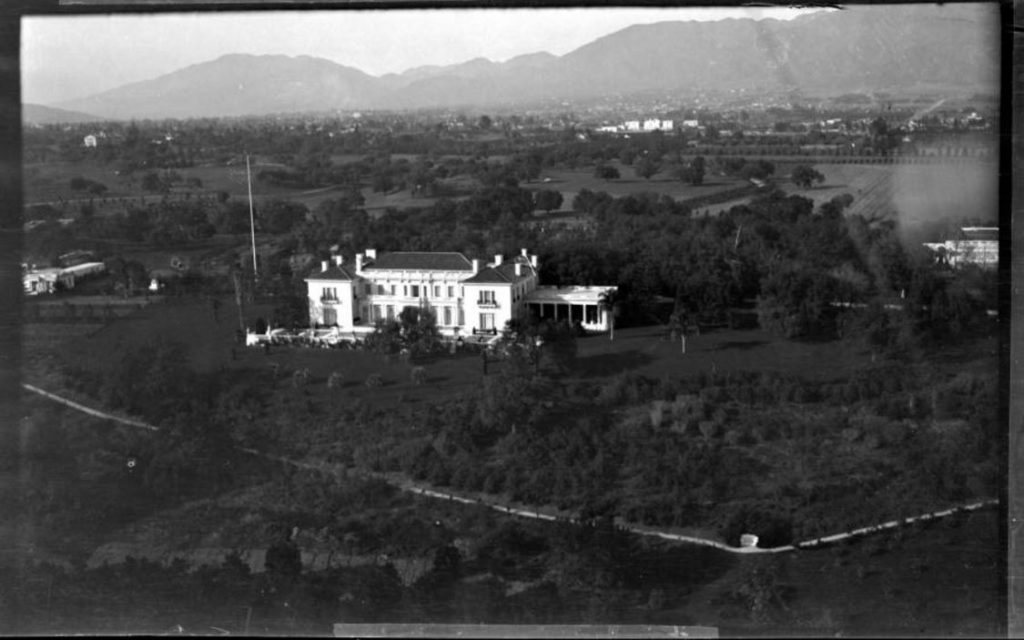 Pictured above is the Huntington Mansion as it nears completion in 1913. Today, this building houses the Huntington Art Gallery. Photo credit: “Aerial View of the Henry E. Huntington Residence From the South, San Marino, 1913,” Harold A. Parker, Photographer, photoCL 402 (00023), The Huntington Library.

Despite spending extravagant amounts of money on the property and grounds, Huntington did not establish permanent residence at his southern California home until 1914, when he and his new bride Arabella Duval Huntington, widow of his late uncle, arrived in California. Newspapers described the couple’s arrival at the property and their ten-minute drive through the grounds, during which time they passed “orange groves edged with cypress trees, and above beautiful sunken gardens, dotted with marvelous Japanese statuary.”[9] Soon after establishing residency, Huntington and his wife Arabella, both in their 60s, turned their attention exclusively toward building their art and book collections, and to improving the grounds surrounding their extravagant home. In 1919 the couple signed a deed of trust transferring ownership of the extensive property and all of its scholarly holdings to a nonprofit trust. At the same time the couple laid the foundation to establish a research institution allowing future scholars to use and enjoy their vast collections. In May 1928, following Huntington’s and Arabella’s deaths, The Huntington Research institution opened to the public.[10] In all, at the time of the institution’s opening, The Huntington Library and Art Gallery consisted of two buildings, the art gallery (original Huntington Mansion) and the Library (building completed in 1920) and 207 acres of gardens and grounds.[11] 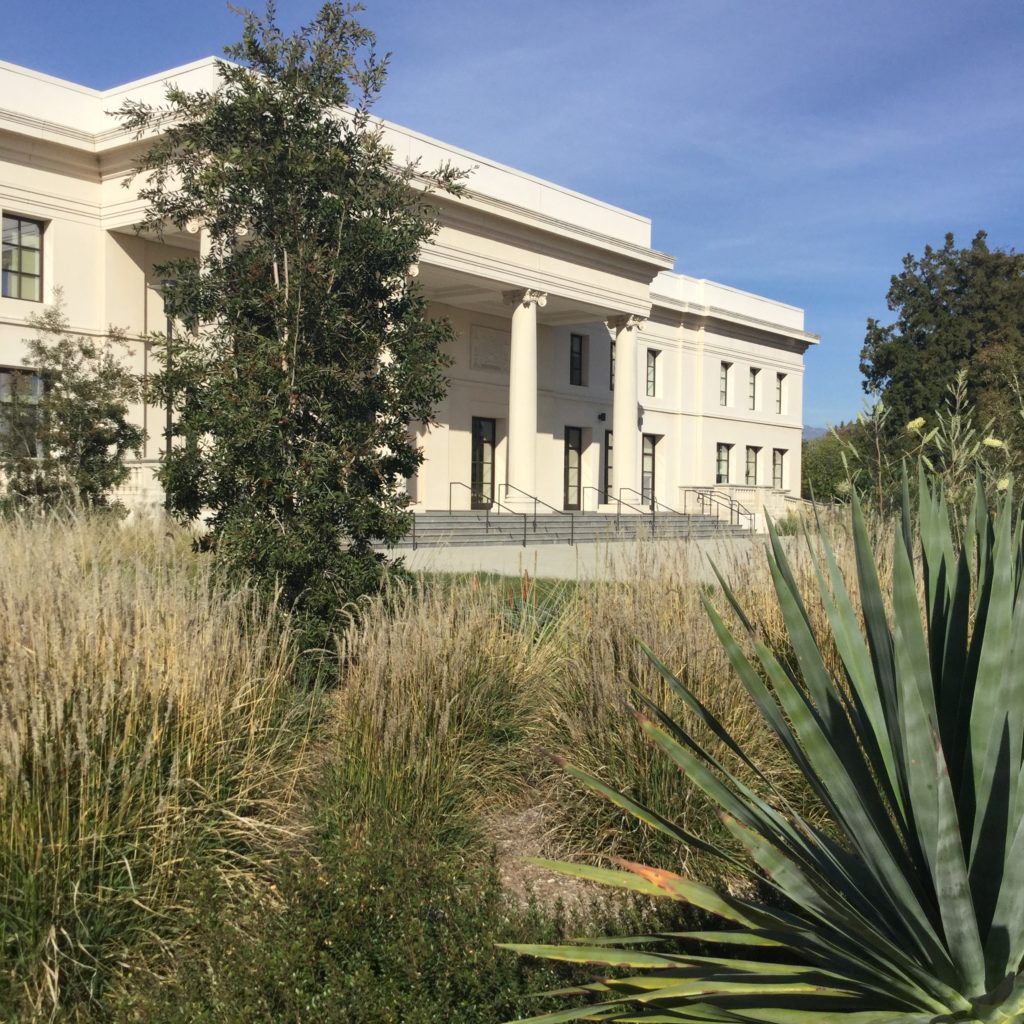 Over the course of the 20th century, the board of trustees has successfully guided the institution financially and has continued the founders’ efforts to build and maintain a library unrivaled in its unique and obscure materials, as well as a world class research facility. Given the Huntington’s prestige among scholars, I feel humbled to have walked its halls, handled its rare materials, and admired its grounds. Check back soon to learn more about the unique collections currently housed at The Huntington Library, as well as the collection that brought SHRA researchers to the facility this past December. 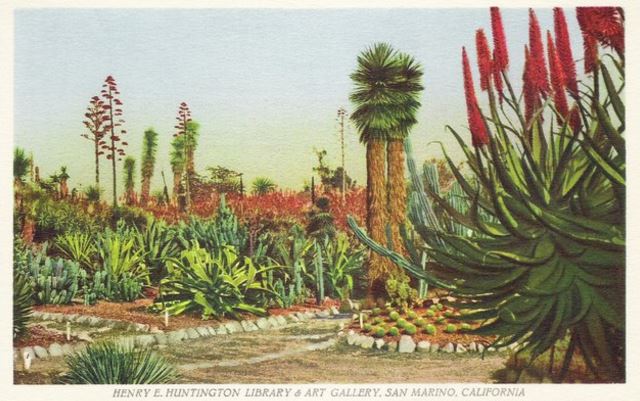