SHRA » Blog » Environmental History » 3/29/17 – The History of the Olympics…or the Olympics as History, Part III

The memories of last summer’s Rio Olympic Games are still fresh in the minds of sports aficionados, however, much of the fanfare and excitement that existed leading up to and during the event have faded from the public arena. As time progresses, the victories, defeats, and organizational challenges and successes of the Rio Games will become the newest installment in the legacy of a worldwide sporting event that spans more than a century. But there is one element of the Rio Games that exists as more than memory: the physical brick and mortar of the stadiums, the arenas, the pools, the housing complexes, and the transportation infrastructure. This is true of nearly all modern Olympics games, and these mammoth structures, often deemed “white elephants,” reflect not only the extreme monetary costs of hosting the games, but also the environmental and ecological legacy of the games. 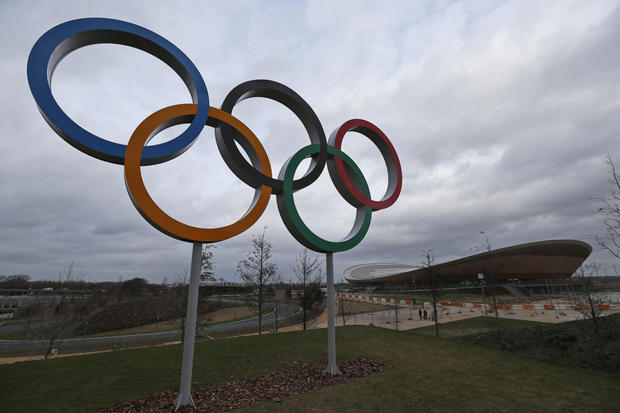 Image of the symbolic Olympic Rings in front of the Velodrome in Queen Elizabeth Olympic Park, London, England. Photo credit: “Olympic Challenge: How Do Host Cities Fare After the Games,” CBS News, February 24, 2014.

Google Earth offers global citizens the opportunity to view the Olympic venues from Rio as well as other host cities around the world, including London, Athens, Atlanta, and Berlin. The dataset for this imagery dates from 1984 to the present, so viewers can see snap shots of the construction phases for stadiums built or remodeled within the last 30 years. Google Maps even offers a “street-view” option to experience a 360˚ virtual tour inside many of Rio’s Olympic venues.[1] This technology provides the opportunity to see the size and magnitude of Olympic parks and in some cases, the environment or landscape prior to the venues’ construction. What’s missing from photographs, however, is the controversy that accompanies each venue’s transformation: their cost to construct, cost to maintain, the forced removal of residents from proposed Olympic sites, and uproar over potential decimation of natural habitats. 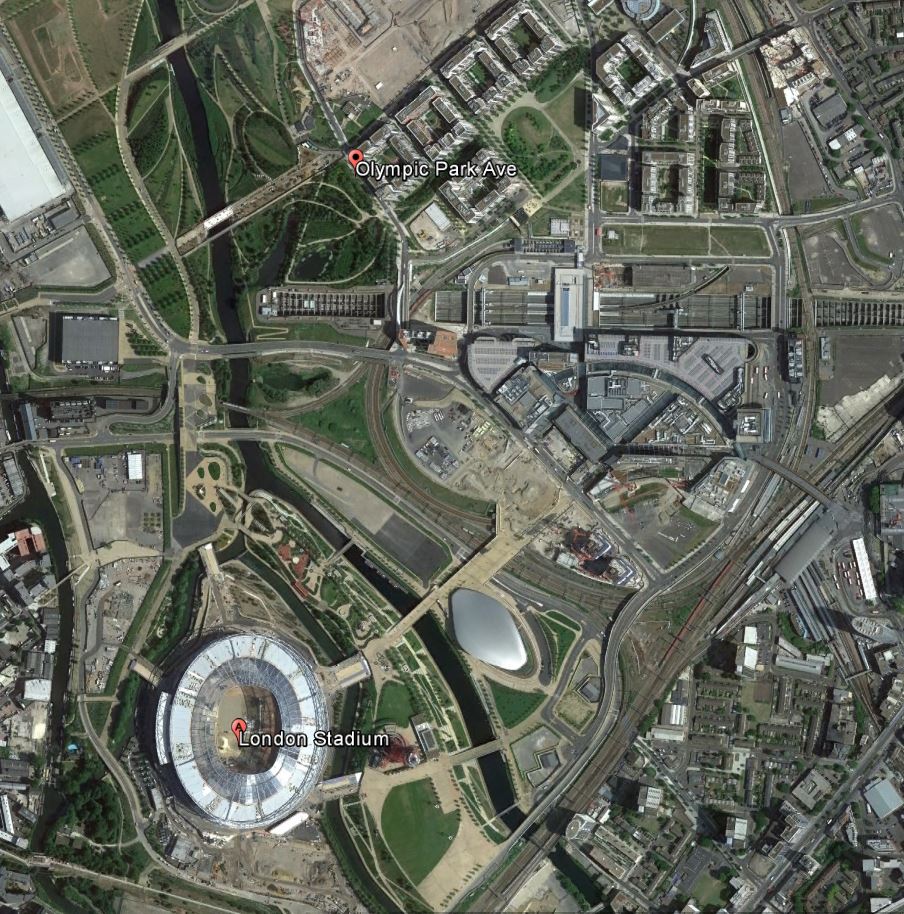 Pictured above is imagery from June 3, 2015, depicting the London Olympic Stadium and Olympic Park, both which appear under construction. Photo Credit: “London Stadium,” Google Earth.

Since the opening of the first modern Olympic Games in 1896 (click here to read about the revival of the Modern Olympics), the logistical challenges of bringing together athlete and spectator has grown. Incorporated in that challenge are the ever-rising costs of hosting the Olympic games, which have grown steadily since the 1936 Berlin Games, when organizers built the first multi-sport 100,000-seat Olympic complex. Today’s hosting costs are on average 200,000 percent higher than they were in 1896.[2] Most of the money goes towards the built environment, which can include as many as 25 various structures or venues and an expansive transportation infrastructure. 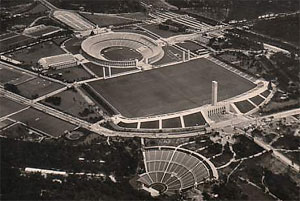 Pictured above is an aerial view of the Berlin’s 1936 Olympic Stadium and grounds. Hitler commissioned the construction of these venues to express the power of the Nazi Regime. Photo credit:Vintage Postcard

The Olympics’ built environments have affected each host city’s natural environment, as well. Locals first raised concerns over the environmental impact of the Olympic games during the 1932 winter Olympics near Lake Placid, New York. The Association for the Protection of the Adirondacks argued against the organizing committee’s decision to build a bobsled run on state lands that were under the protection of the “Forever Wild Amendment” to the state constitution.[3] The dispute eventually settled in a New York court where the judge ruled against the Olympic organizing committee. The committee then had to scramble to build the run at an alternate location, which crews were able to complete in rapid time.[4] 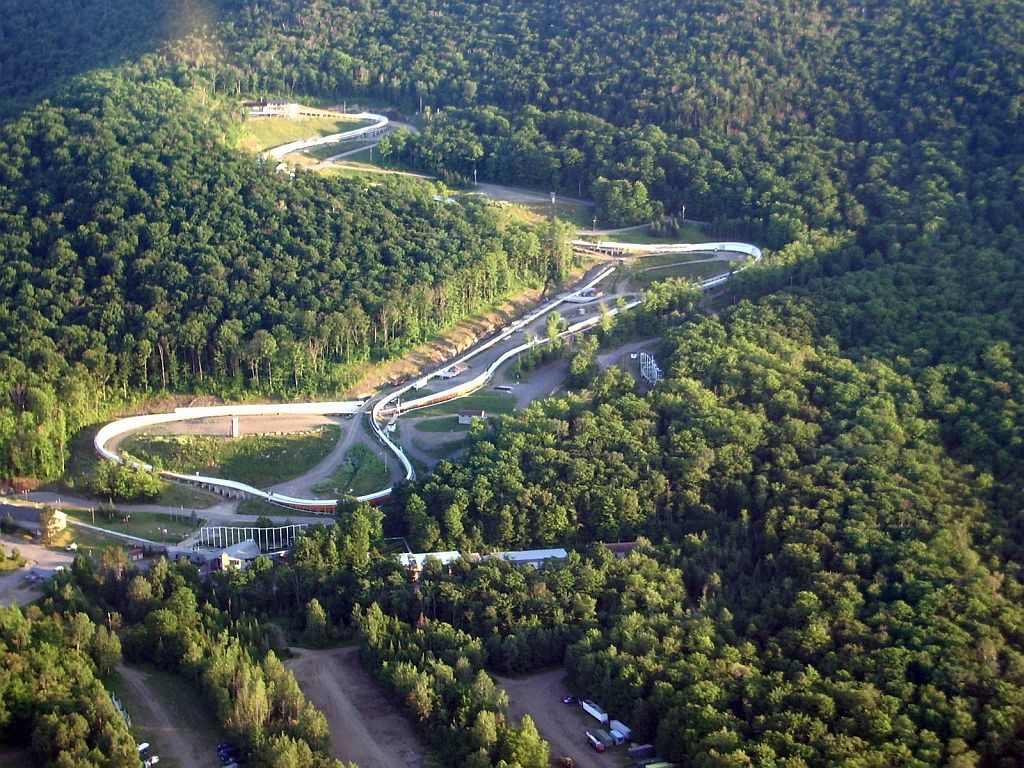 As the spectacle and size of the Olympics have grown, so too have the environmental concerns. Experts claim that the recent 2014 Sochi Olympic Games, whose price tag reached nearly $55 billion dollars,[5] had the biggest environmental impact of any modern Olympics.[6] To construct the Sochi Olympic Village, Russia’s Organizing Committee signed off on the destruction of the Imeretinskaya Lowlands, which had been a mix of lowlands and agricultural land that provided a key habitat for birds on the Black Sea Flyway and had been home to farmers.[7] 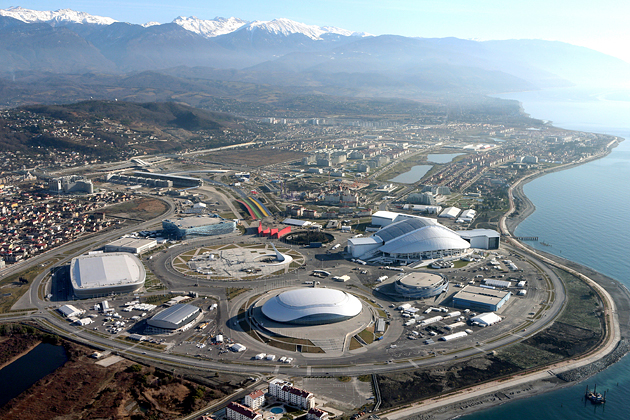 The environmental, cultural, and financial impacts of the Olympics become most concerning after the event has passed. Despite changes to the Olympic charter in 1996 that recognized the ecological and environmental impacts of the Olympic Games, few host cities have been able to successfully implement plans to manage these impacts once the games end. For example, Athens’ 2004 Olympic venues sit empty and in complete disrepair as the country attempts to recover from an economic depression that has plagued the country with “record unemployment, homelessness, and poverty.”[8] The reality of the challenges associated with venue upkeep are also plaguing Rio De Janeiro. The 2016 Olympic host city is already feeling the monetary and environmental weight of the post-Olympic period, and it has only been six months since the closing ceremony. News sources have reported vandalism at the Maracanã Stadium, and have claimed that the organizers still own creditors $40 million dollars. Organizers have also failed to find private entities that could take over management of other venues, including the tennis centers, Velodrome, and Olympic golf course. These locations are falling fall victim to post-Olympic ruin, much like the venues in Athens.[9]

Pictured above, in complete disrepair is Maracana Stadium, where the opening and closing ceremonies for the Rio Olympics took place.  Photo credit: “Legacy of Rio Olympics so Far Is Series of Unkept Promises,” The New York Times, February 15, 2017.

There is a role for historians to play as future host cities strategize over their role. Examining and analyzing the problems of the past may help these cities better anticipate the potential pitfalls of hosting and imagine and plan for the site’s role in the post-Games world.

[2] David Goldblatt, “It Wasn’t Always So Expensive to Host The Olympics. Here’s What Changed,” Time, July 26, 2016 http://time.com/4421865/olympics-cost-history/ The Berlin Games were the first games where organizers specifically constructed a multi-sport Olympic

[9] “Legacy of Rio Olympics so Far Is Series of Unkept Promises: Less thank Six Monthls After the Games Ended, Many Sites Have Been Abandoned, Despite Government Promises to Leave “No White Elephants” Behind,” the New York Times, February 15, 2017. https://www.nytimes.com/2017/02/15/sports/olympics/rio-stadiums-summer-games.html?hp&action=click&pgtype=Homepage&clickSource=story-heading&module=second-column-region&region=top-news&WT.nav=top-news&_r=1