A recent research trip took the SHRA team to Sacramento, California. The project we were working on had us examining events during the very early days of California statehood, when San Francisco was by far the biggest and most influential city in the new state. As we sat at the State Library, looking out at the State Capitol, we wondered why Sacramento had become the capital city. This question led me to consider how other state capitals, many of which are also located away from either today’s or past population centers, became the political power hubs of their states. I decided to do a little investigation into how states chose their capitals and whether each case was different, or if there were underlying themes. 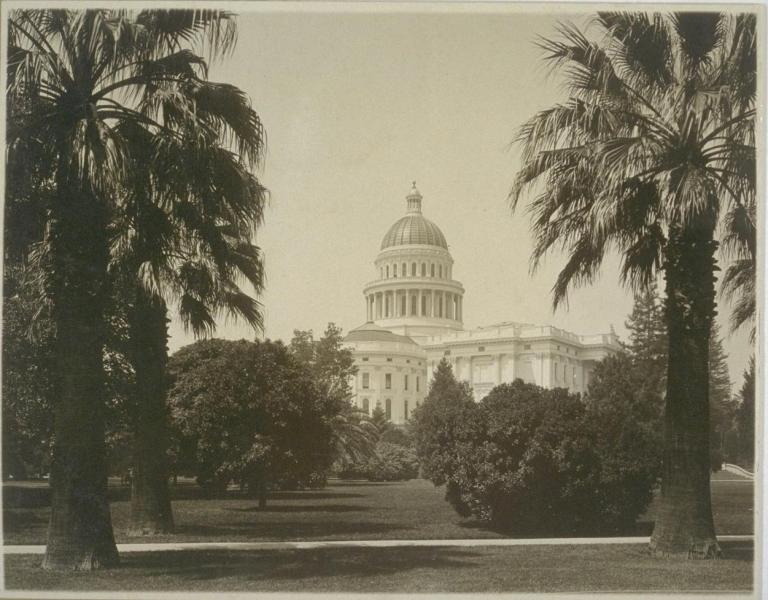 The California Capitol, circa 1920. Photo.

My brief look at the history of a handful of state capitals around the country yielded a few themes but also demonstrated that there were no rules for legislatures to follow in choosing a capital. While Sacramento was certainly not the only “secondary” city chosen as a state capital, population was a consideration for many early legislatures. Geography and complicated, often contentious, local politics also played a role in how young states made these decisions. The government seat needed to be accessible to the entire state’s population, it needed to facilitate commerce, and in some cases, it needed to be defensible.[1] Importantly, it also needed to have the physical space to host government infrastructure. Some states, like Massachusetts, went for the obvious choice when selecting a state capital. Boston had been a seat of government long before Massachusetts came into statehood.[2] But for most states, particularly those not included as one of the original thirteen colonies, there was not a clear choice. In the case of Sacramento, adequate space was a factor I had overlooked, and it appears to have a played an important role in Sacramento’s selection as California’s state capital. 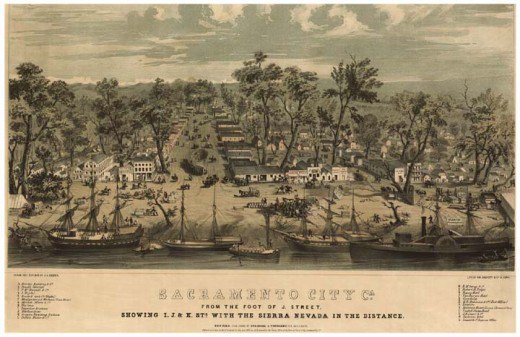 Capital cities are symbolic places and state governments require infrastructure to function. When a state conferred capital status on a city, it needed to know that there would be space for a capitol building, courthouses, and other supporting office buildings. In some cases, such as Jefferson City, Missouri, and Carson City, Nevada, these requirements were major factors in the legislature’s capital selections. Jefferson City was essentially a planned capital community; the legislature moved the capital away from the burgeoning city of St. Louis to a more central and less developed location within the state. This move afforded them more space to construct a capital city from scratch.[3] Early settlers of Carson City, Nevada, hoped that if they set aside land for a future capitol and state government, their wish would be granted. And indeed, the physical location they designated for government did help the city earn its capital title.[4] 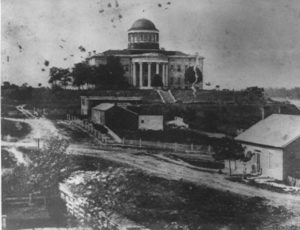 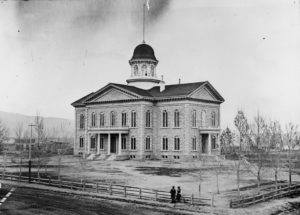 In some ways, Sacramento was like Carson City. Though I found no evidence that early settlers had deliberately made space for a future state capital, the city was still in its early planning stages when California became a state. Though San Francisco was a much larger city, Sacramento (and other California cities) promised to be better sites for the symbolic capitol building Californians desired. Sacramento’s path to capital-hood was not immediate. The first capital of California was in Monterey, a natural choice due to the empty official government buildings left behind by the Mexican government after the Mexican American War. None of these buildings, however, proved to be good for hosting a state government. The Bay-area cities of San Jose, Vallejo, and Benicia also each held the capital title briefly, but all lacked suitable accommodations for the growing state government. Sacramento’s name floated to the top of the list of contenders in part because it could make space for a government. Its geography, on the edge of the Sierras, along a navigable river used for trade, and near the early gold rush sites, was also important. Many of the immigrants rushing to California stopped in Sacramento first, giving it the added benefit of being a population center. Sacramento had a suitable courthouse for the first state legislative meetings, and when it became the official capital in 1854, city leaders planned its growth around a new capitol building.[5] 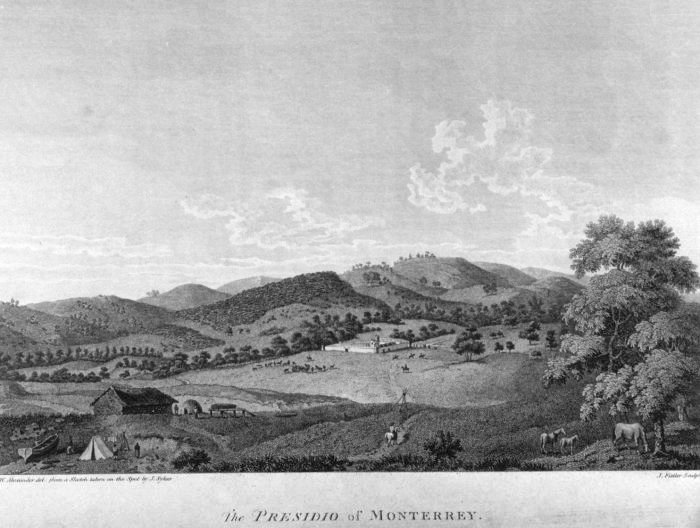 Early Monterey from The Presidio of Monterrey”. Volume II, plate V from: “A Voyage of Discovery to the North Pacific Ocean and Round the World” by Captain George Vancouver (1790s). Credit.

Today, Sacramento’s extreme northern location in a long and populated state may seem an illogical location for a center of state government. The gold rush that brought settlers has largely evaporated, and the metropolitan areas of San Francisco/San Jose and Los Angeles, with their suburbs, dominate the population of California. California’s economic drivers and political power figures do not live and work in Sacramento. In this respect, Sacramento is like Juneau, AK, Albany, NY and Springfield, IL. However, the history that develops around a capital city, as well as the infrastructure and the iconic buildings, make it virtually impossible to consider a re-location.[6] While residents of large non-capital cities may be frustrated by the distance between them and the capital cities that govern them, the stability of our capital cities does make for interesting historical investigations and provides reason for exploring areas outside regional metropolises. For me, a trip to Sacramento led to an interesting dive into an under-explored narrative of our county’s political history.