It is, perhaps, old hat to remark on the loss of a broader human story when we choose to memorialize a landscape in a particular way, but I was recently reminded of how prevalent this occurrence is in a place I least expected: downtown Washington D.C. As someone who studied environmental history, and especially wilderness history, I am accustomed to thinking about national parks and designated wildernesses as places where land managers have chosen to obscure the human settlement that once occupied those landscapes. In many of our national parks, government officials actively removed Native Americans and white settlers from their homes in order to create the appearance of a landscape untarnished by humanity. Land managers encouraged this type of “unsettlement” across the country and it is unsurprising to find stories of such occurrences in wilderness areas; however, I did not expect to discover evidence of similar efforts in a city park located at a presidential memorial in our nation’s capital. 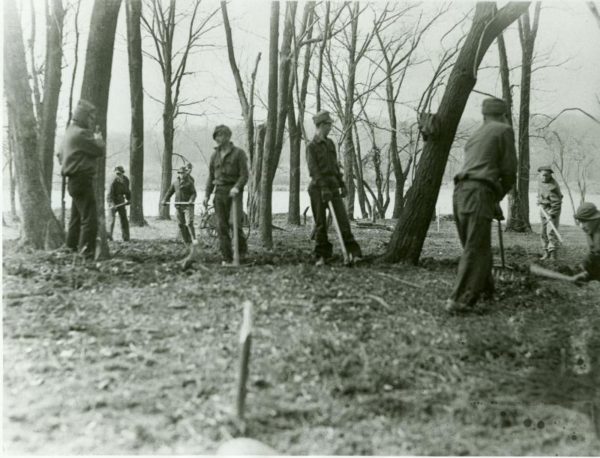 The Civilian Conservation Corps helped remove traces of past uses of the island, as well as non-native plants, and planted new trees for the Theodore Roosevelt Memorial in the 1930s.

On a recent research trip to the National Archives in Washington D.C., a discussion amongst SHRA staff of “the Roosevelt memorial” led to laughable confusion as different locations and different descriptions (of what turned out to be two different memorials) had our heads spinning. The Franklin D. Roosevelt Memorial is the more recognized and visited of the two Roosevelt memorials in D.C. It sits on a narrow strip of land separating the tidal basin and the Potomac River between the Martin Luther King, Jr. Memorial and the Thomas Jefferson Memorial.  It is easy to access from the National Mall and can be included in a circle tour of some of D.C.’s most iconic landmarks. The Theodore Roosevelt Memorial, on the other hand, is on an island in the Potomac, accessible only by footbridge from a parking lot in Virginia. The National Park Service manages the nearly 90-acre Theodore Roosevelt Memorial as a wild land today. It has two miles of foot trails in a forested landscape and accommodates wildlife and promotes quiet reflection in the midst of a bustling capital city. It is the largest, but also one of the least visited and least known presidential memorials, which explains the SHRA confusion and my motivation to look deeper into its history. 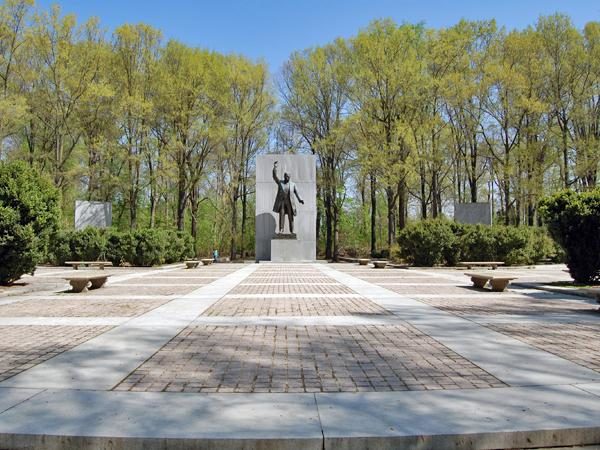 Today’s memorial to Teddy Roosevelt is comprised of nature trails and a statue of the former president.

The island’s present management obscures its “Forrest Gumpish” past – when it served as witness to many of America’s most symbolic moments, just as Forrest Gump did in the synonymous movie. Historical texts first mention the island in the mid-1600s, associated with the Necostin (Anacostian) Indians who had villages there. Early white settlers called the island “Anacosta” or “Analostan” likely in reference to these first inhabitants. 1960s archeological excavations of two prehistoric sites on the island uncovered “pottery sherds, projectile points, animal bones, and similar artifacts, giving tangible proof of a substantial, and most likely long-lived, Native American presence on the island.” [1] 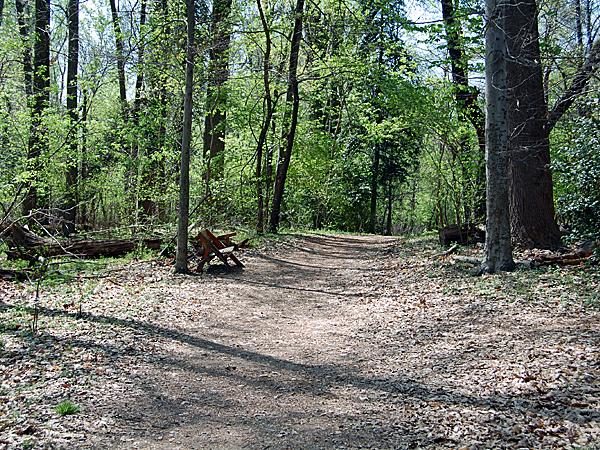 Today’s memorial to Teddy Roosevelt is comprised of nature trails and a statue of the former president.

Anglo use of the island replaced Native American use by the late 1600s, and Analostan Island was temporarily referred to both as “My Lord’s Island” and “Barbadoes” as different owners paid tribute to a benefactor and a former home, respectively. By 1717, it had passed into the hands of George Mason IV, a revolutionary patriot and author of the Virginia Bill of Rights. His son developed the island as a plantation, built a mansion on it, and crafted a causeway to connect the island to the Virginia shoreline. John Mason named the mansion, “Analostan” but the island came to be known as “Mason’s Island.” The Mason family occupied the island until 1825 when financial misfortune led the Branch Bank of the United States to repossess it. 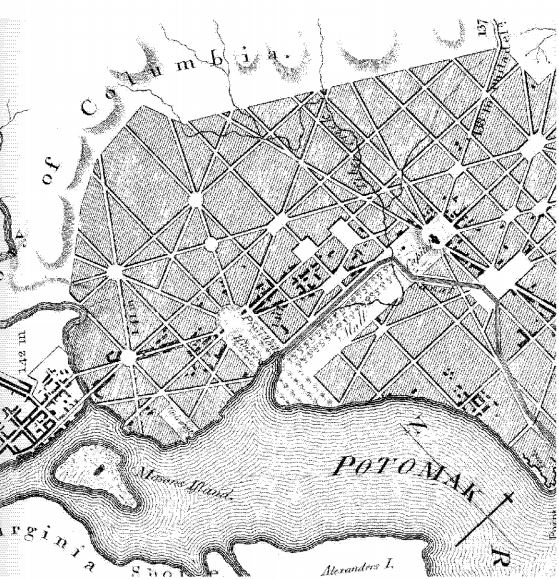 The Mason family built a mansion and operated a plantation on what was once Analostan Island. The family also operated a ferry across the Potomac. This map shows the island on an 1802 map.

A number of short-term owners occupied the island from 1825 until 1861 when Union troops took it over just after the outbreak of the Civil War. The Union army used Mason’s Island throughout the war, first as a staging area, later as a commissary storage and distribution point, and finally as a secret encampment of the first African American regiments to fight in the war. In the final year of the Civil War, the island’s use naturally morphed into an African American “freedmen” refugee camp for those fleeing the violence of the war. Ironically, the camp’s organizers placed many of the freedmen in the former buildings of the Mason plantation estate. 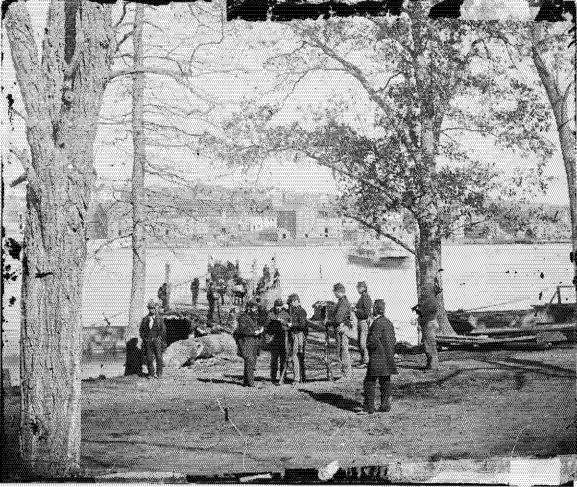 A drawing of Union troops on “Mason’s Island.” Union troops used the island for encampments, and as a storage and distribution point.

Following the end of the war, the government removed the refugee camp and returned the island to a private owner, who leased the island and its buildings on short-term contracts. It variously hosted a resort, an athletic club, and, during the Spanish American War, an explosives test site. The U.S government twice considered it as a site for a contagious diseases isolation hospital, but on the whole the island was uninhabited from the Civil War onward and the buildings fell into disrepair.

By the early 1900s the U.S. government began considering the island as a potential site for park land, perhaps for the growing community of Georgetown, which had little green space. However, it wasn’t until the Roosevelt Memorial Association (RMA) purchased the island in 1931 that concrete discussions about its use as a city park began. The RMA sold the island, now called Theodore Roosevelt Island, to the U.S. Government in 1932, but retained the right to establish a memorial to the former president there. Plans for the memorial moved forward in the 1930s, with the hiring of Frederick Law Olmsted, Jr., son of the founder of landscape architecture. Olmsted, like his father, preferred to accentuate the natural features in a landscape at the expense of cultural sites. With nature as his guide, Olmsted designed a memorial that would replicate the natural, “primeval” forest on the island. His plans called for the removal of any signs of human habitation, including the ruins of the Mason mansion. 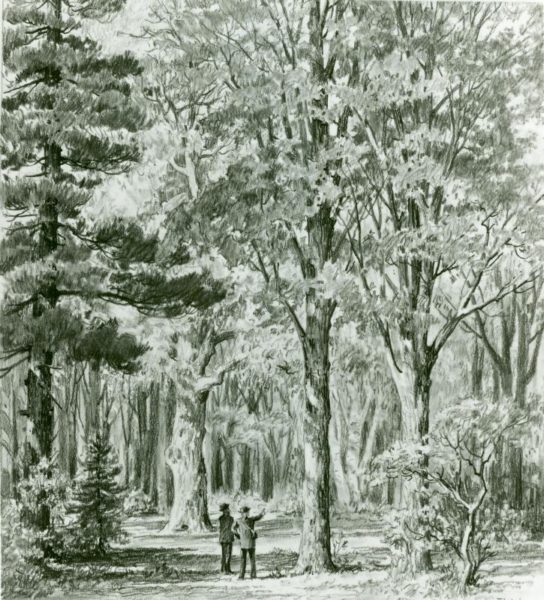 In 1932, the Roosevelt Memorial Association hired Frederick Law Olmsted, Jr. to design a memorial to Teddy Roosevelt. Olmsted proposed a design that eliminated all past uses of the island and returned the landscape to primeval forest. This drawing shows Olmsted working on his proposal.

While Olmsted may have been acting under an aesthetic when designing a landscape for the park, the RMA was deliberate in its intent to ensure that the island was a memorial to one man alone, and not to those who had used the island in the past. In doing so, the RMA replicated what has taken place across many of the United States’ most celebrated landscapes. The deliberate erasure of historic use is an ironic twist in a landscape that is meant to help us remember a man from the past. Today, much as the RMA intended, visitors encounter a statue of Teddy Roosevelt and some of his more famous quotes. They do not encounter Native American villages, southern plantations, the Civil War, or a freedman refugee camp, even though they stand on land that was part of these past stories. This forced amnesia has left me wondering about the historic uses of the land under other national memorials and has encouraged me to consider how we can best pay tribute to both a president and a place. Surely, they don’t have to be exclusive.