9/7/17 – The Lookouts: Sentinels of the Woodland Empire

Way above the forests, that are in my care,

Tied onto the world below by a telephone,

Snow peaks on the skyline, woods and rocky ground,

The green of Alpine meadows circle me around,

Waves of mountain ranges like billows of the sea –

Seems like in the whole wide world there’s not a soul but me.

Blinking at the lightning on the stormy days,

Here to guard the forests from the Red Wolfs tongue

I stay until they take me down, when the fall snows come.

In mid-August 2006, a juvenile thunderstorm materialized over the vast Snake River Plain in southwest Idaho. As the storm moved across the honeycombed basalt formations of the plain toward the Boise National Forest (BOF) in Idaho, it developed into a mature thunderstorm. At first, observable streaks of precipitation began to fall from the base of the monolith, but quickly evaporated before hitting the ground. Peals of thunder shattered the calm, alerting the United States Forest Service (USFS) employee staffing Silver Creek Lookout (LO) of the impending lightning storm. Within moments, veins of lightning flashed a trail of nucleated ions across the deeply bruised sky. Inevitably, several streaks of lightning connected with the towering Ponderosa-Pine trees exposed high on the ridge tops overlooking the Middle Fork of the Payette River near Garden Valley, Idaho. The intensity of the bolts that struck the trees disintegrated their bark and cast firebrands yards into receptive fuel beds, where the brands ignited wildfires. 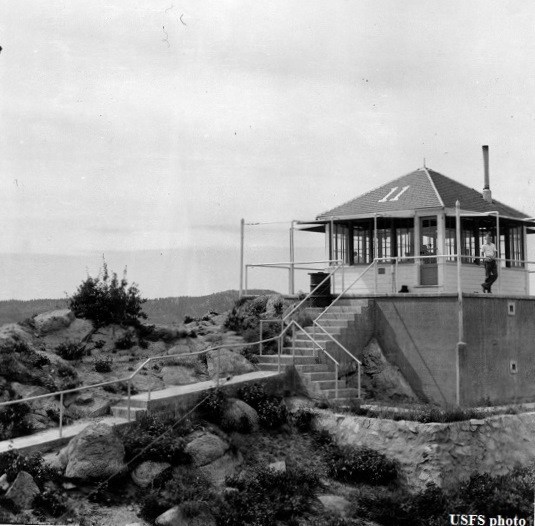 Within moments of ignition these fires sent smoke up into the air, clearly visible from the lookout, as the small fires first consumed the needle litter covering the ground and then began to consume the drought-stressed forest. Shari White, the USFS employee manning Silver Creek Lookout, used her binoculars to glass the area where only seconds before the clouds had discharged their lightning. White’s trained eyes quickly fixated on the individual smokes and she immediately moved to the fire finder in the center of her lookout tower. She peeked through the nearest of two sighting apertures mounted above the forest map, making slight adjustments until she aligned the cross hairs in her view with the fire. She then noted the degree on the graduated ring, which framed the circular forest map beneath the site. 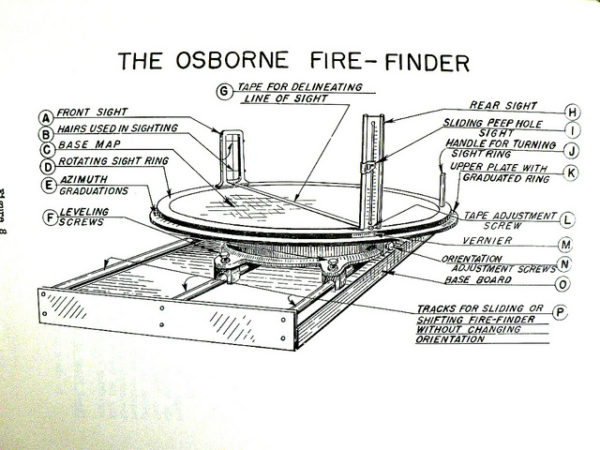 Developed by William B. Osborne, Jr., the device that bears his name-the Osborne Fire Finder-saw continued production by Leupold-Vopel & Company until 1989. The ingenious device is still used by lookouts throughout the United States to pinpoint wildfires. Photo Credit: Black Diamond NOW, 2014.

USFS employees like White receive extensive training to monitor lightning strikes and track wildfires from the moment of ignition using maps and compasses. Having shot an azimuth – the horizontal angle of the compass bearing – she located the fire on the map and radioed the information to Boise Dispatch – the interagency center in Boise, ID responsible for coordinating fire suppression efforts between the Idaho Department of Lands (IDL), the Bureau of Land Management (BLM), and the United States Forest Service (USFS) in Southwest Idaho. From the lookout towering above Silver Creek, White set in motion the USFS’s systematic response to wildfire that the agency has crafted and refined over the past century – dispatchers radioed the resources like smokejumpers, handcrews, engines, and helicopters and those geographically closest to the new “starts” were ordered to respond to the incidents.

This system, dating back to 1905, constitutes the USFS’s continued efforts to combat wildfire – “the persistent predator on man and his structures.”[2] The cultural perception of fire as a profligate predator that preys on “man,” his structures, and valuable natural resources such as timber spurred the development of high-modernist programs that sought to master nature – specifically wildfire. Lookout towers and the USFS employees who staffed them have comprised one element in the agency’s mission to apply scientific expertise to control wildfire. 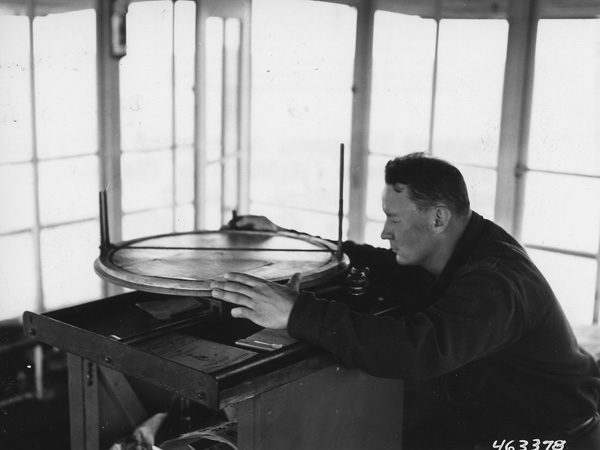 Raymond Thompson using the Osborne Fire Finder in the Brule Lookout Tower in Minnesota to precisely locate a wildfire in Minnesota. Photo Credit: The Forest History Society, circa 1950.

Silver Creek LO is but one “sentinel” in a network of lookout towers that spanned the continental United States, a system of towers guarding the nation’s valuable timber empire that once included 5,060 structures.[3] Following the catastrophic fires of 1910 that swept through northern Idaho, Montana, and Washington, commonly remembered as the Big Blowup, early fire detection became essential to the agency’s mission to master fire. These great fires traumatized the young agency, which henceforth codified a policy of aggressive fire suppression for decades to come.[4]

As early as 1900 the USFS had erected primitive, fixed-lookout points, but as the smoke cleared from the 1910 Big Blowup an increased number of “Woodland Sentinels” materialized throughout the national forests. Simple platforms erected in the top of towering trees comprised the earlier, more primitive lookouts. Stout cabins erected from hewn logs and built atop prominent peaks comprised some, while still others were built of steel supports that towered over the forest canopy. Regardless of their architectural incarnation the “Woodland Sentinels” – both the structures and their denizens – performed one primary function: early-fire detection. Early fire detection then laid the basis for the ultimate expression of the USFS’s high-modernist program of total-fire suppression: the “10:00 a.m. Policy.”

Tune in next week to read about the “10 a.m. policy” and the long-term effects it has had on American timberlands. 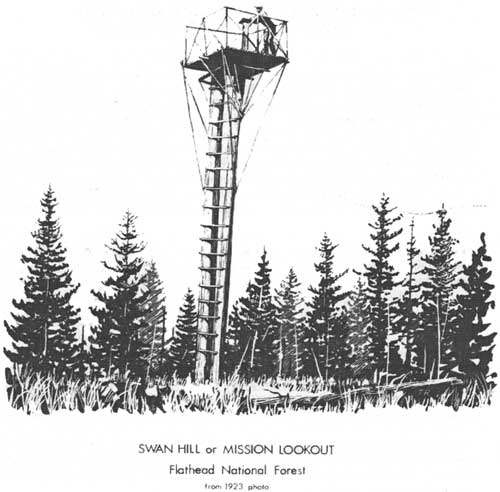 The Swan Hill (Mission Lookout) Lookout standing guard over the Flathead National Forest in Northern Montana, circa 1923. Fixed lookout points such as Swan Hill formed the initial core of a system of lookouts that provided early detection of wildfires throughout the national forest system.  Photo Credit: Forest History Society, 1923.