Iceland has always loomed large in my mind, its geographic extremes and stark beauty placing it high on the list of places I want to explore during my lifetime. The volcanic island’s larger-than-life reputation in my head belies its true size, which is about that of the state of Oregon. Iceland has, however, had a giant impact on the rest of the world at several different points in history when its volcanoes cast poisonous gases and ash into the atmosphere. While physically isolated from the rest of the globe by the cold waters of the North Atlantic, scholars are increasingly recognizing how connected the island’s environmental history is with world history. 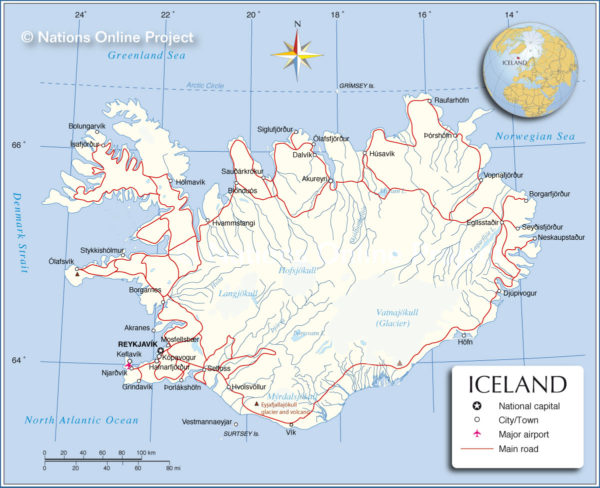 Many people are familiar with Iceland’s April 2010 eruption of Eyjafjallajökull, even if they aren’t as familiar with the volcano’s name. That eruption stopped air travel across Europe several times over two months. But Eyjafjallajökull is by no means the superstar of Iceland volcanology. That honor belongs to the massive eruptions of Lakagígar, or Laki for short, which lasted from 1783 to 1784. Like other world-famous volcanoes, Laki is the focus of several works of environmental history, written to show the connections between an eruption and the global natural, social, and political events that followed.[1] 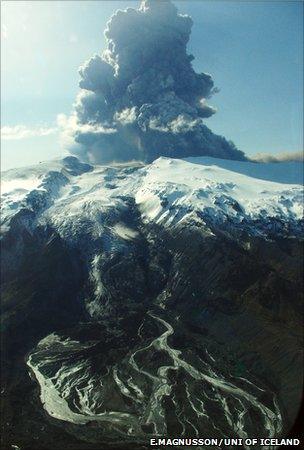 Eyjafjallajökull during its 2010 eruption, which famously halted air traffic over much of Europe for several weeks.[ii]

In recent decades, academic and popular attention have been showered on the subject of how an extremely large volcanic eruption in one part of the world can wreak havoc on a physically separate part of the world. This trend emerged in no small part because the effects of a volcano demonstrate, in miniature, how climactic disruptions can have a slew of far-reaching repercussions, providing hints to what may be in store with larger-scale climate change. From Boer, Sanders, and Ballads’ Volcanoes in Human History: The Far-Reaching Effects of Major Eruptions, published in 2004, to Clive Oppenheimer’s 2011 Eruptions that Shook the World, scholars have shown a popular audience in vivid detail how volcanoes have “jostled the human toehold on survival” throughout human history. Several major eruptions, like that of Mt. Tambora in 1816, and Krakatoa in 1883, have had such evident global effects that they have been the subject of multiple popular works, most famously, Simon Winchester’s Krakatoa: The Day the World Exploded, August 27, 1883, which became a New York Times bestseller.[iii] 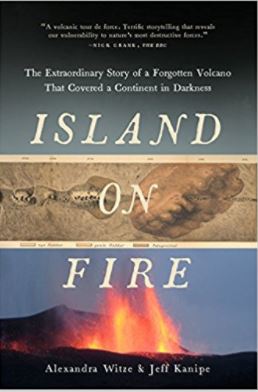 Island on Fire book cover showing the series of craters that make up Laki as well as an active eruption.[iv]

Laki got its own special treatment in 2015 with the publication of Island on Fire: The Extraordinary Story of a Forgotten Volcano that Covered a Continent in Darkness by Alexandra Witze and Jeff Kanipe. This environmental history of volcanic eruptions was written for a general audience, with a particular focus on Iceland’s Laki, and summarized scholarly research that connected the June 8, 1783 eruption of Laki with a global (and especially European) fallout of catastrophes.

The effects of the massive eruption outside of Iceland began with a “dry fog” that reached Norway and northern Scotland two days after the eruption, France ten days after, and England by June 23. According to historical sources, during the summer of 1783 a haze hung thick over Europe, trapping heat and causing all manner of respiratory and heat related distress in humans (in many cases leading to death) as well as crop disease and failures. The heat and haze spawned violent electrical and hail storms that caused their own forms of damage. As the haze dissipated in the fall, frosts came early and the winter of 1783-1874 was bitter on the European continent. Witze and Kanipe narrate the links researchers have found between the bitter cold and the sulfur Laki spewed high into the atmosphere that winter, increasing global albedo (reflection of sunlight) and redirecting warm jet streams. Though the Laki eruption ceased in February 1784, the summer of 1784 was cool and winter again came early. Two years of unpredictable weather and bad harvests led to widespread famine, disease, and social unrest around Europe – including in France. Witze and Kanipe describe how some researchers postulate that Laki may have even been a significant factor in the French Revolution that happened a few years later, in 1789.[v] 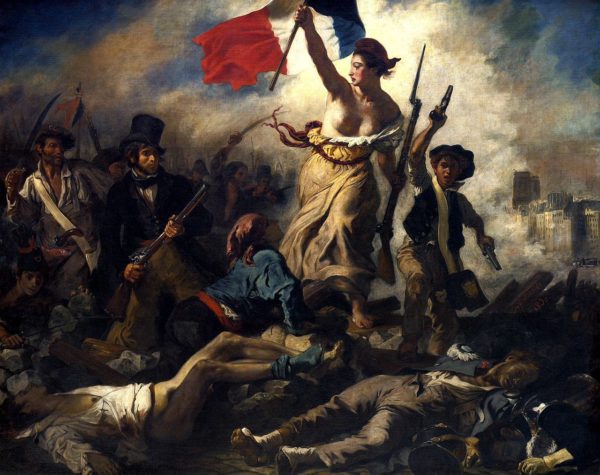 In reading some of the academic sources that Island on Fire references, I found compelling evidence for Laki’s effects on more distant parts of the globe than Iceland’s European neighbors. For example, in 1999, Jacoby, Workman, and D’Arrigo connected the 1783 Laki eruptions to oral histories of famine in the Inuit communities of northwest Alaska. Using volcanology, climatology, history, anthropology, and dendrochronology (tree ring data), the scholars corroborated long-told stories and showed the effects of a distant eruption on local food availability.[vii] Alan Mikhail accomplished a similar task in his “Ottoman Iceland: A Climate History” published in Environmental History just a few months after Island on Fire arrived in bookstores. In his work, Mikhail argued that Laki’s disruption of normal monsoon rains in the Indian Ocean, which decreased the flow of water in the Nile, led to the semi-independence of Egypt and helped to start the slow crumble of the Ottoman Empire.[viii] 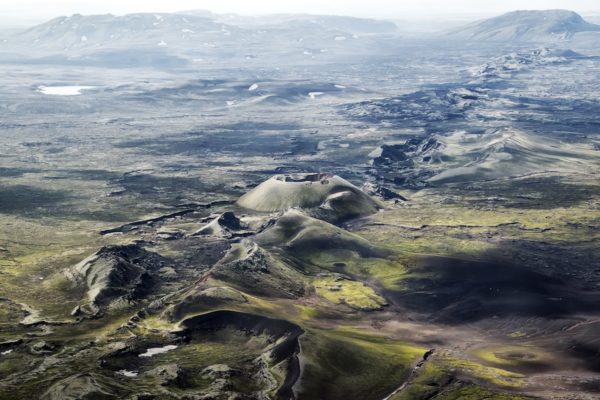 The line of Laki craters viewed from the air.[ix]

In summary, these environmental histories of an Icelandic volcano are fascinating to me not only for touching on a place that I have longed to visit, but also for showing how human beings always have been and still are deeply connected to and dependent on the natural world. We humans have an international space station, can text someone on the other side of the globe, and have genetically modified plants to suit our various needs. But despite all of our advances and developments, we cannot escape our climate and the outsized effects of one geographically small volcanic island. 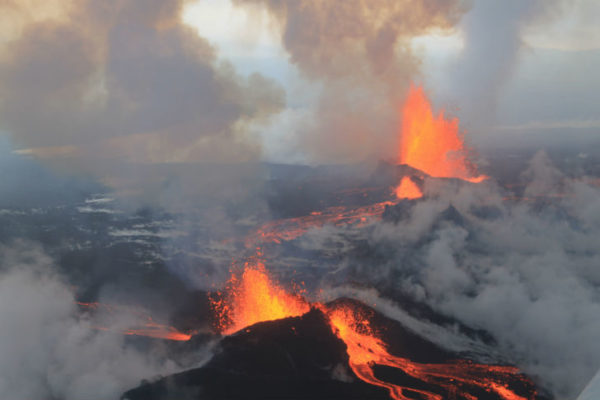 An active volcano in Iceland – a much smaller scale version of the Laki eruption.[x]

This past September, I (at last!) travelled to Iceland on vacation. It was with some trepidation that I hiked right beside the nascent craters of Eyjafjallajökull and slept below the slopes of Katla, a monster volcano buried beneath an ice cap. My reading of Island on Fire gave me a much deeper appreciation for the global power of the landscape around me… and I was very glad that there was no (immediate) need for a new environmental history of Icelandic volcanoes. 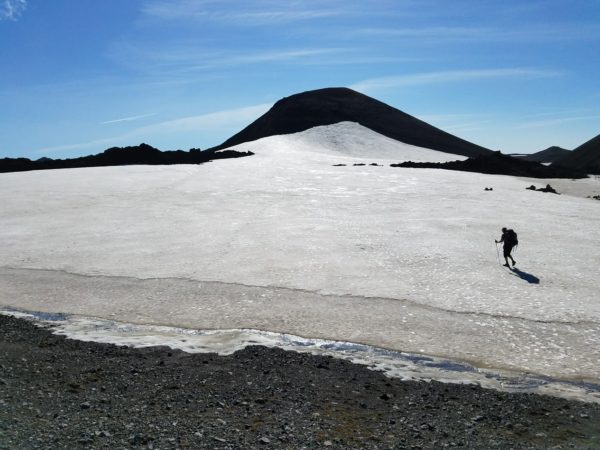 Amalia hiking below the fresh cinder cones and lava flows of Eyjafjallajökull’s 2010 eruption.

[1] To have a global effect, volcanic eruptions need to send gas and dust high enough into the atmosphere to reach jet streams. Many famous eruptions, such as that of Mt. Vesuvius near Pompeii in AD 79, were smaller and more localized in their (still catastrophic) effects. The global effects of massive eruptions were less well-known before modern climate science emerged, though in the case of Laki several scholars did postulate that the haze they were seeing could be connected to Iceland. (Alexandra Witze and Jeff Kanipe, Island on Fire: The Extraordinary Story of a Forgotten Volcano That Changed the World, 1 edition (New York: Pegasus Books, 2015)).