Nothing can take the place of a book. Books reach a target audience that is interested in having something permanent to hold and use, with photographs and graphics that grab attention and tell a story. We bring extensive experience in researching and writing absorbing narratives that convey accessible, personal, and interesting stories. We create both traditional histories and complementary materials that bring your story to life, working closely with graphic designers and publishing houses such as Sweet Grass Publishing to craft compelling and visually exciting stories.

A History of Harris Ranch: How an Entrepreneurial Visionary Transformed a Rural Idaho Valley into an Innovative Urban Community

The Harris family of Boise, Idaho has spent the past 40 years working to transition their cattle ranch to the 1300-acre master planned community known as Harris Ranch. The development is located in Boise’s Barber Valley, which was home to myriad people, wildlife, and various enterprises in the years before the Harris family came to own the land there. The valley was the site of Native American gatherings in the earliest times, and several sawmills, an entire town, a railroad, and a box factory in later years. The Harrises hired SHRA to research and write a book about the rich and varied land use in this valley over time. The book was published in 2020. 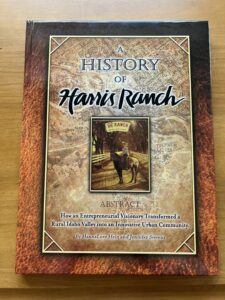 Voices of Courage, Champions of Excellence for the Idaho Education Association

In 2012, SHRA wrote a commemorative history to celebrate the 120-year anniversary of the Idaho Education Association, Idaho’s teachers’ union. Using the association’s rich collection of materials as well as local newspapers and related archival collections, SHRA selected and worked with a graphic designer and publisher to produce a color book that celebrated the organization’s many accomplishments in shaping public education in Idaho, including fighting for students’ and teachers’rights and raising the profile of arts in public education. In addition to providing the content for this book, SHRA found and collaborated with a graphic artist to properly place photos and text in an artful way. Finally, SHRA researched, found, and negotiated with Sweet Grass Publishing on behalf of the IEA to produce a beautiful, color book within the allotted budget. The book was distributed to hundreds of teachers and schools throughout the state of Idaho. SHRA’s work on this project was recognized by the National Council on Public History, which awarded it an Honorable Mention for the Excellence in Consulting Award for 2013.

In 2015, SHRA helped produce a historic cookbook as part of a larger 100-year anniversary celebration of the Idaho Power Company. Cooking has been an integral part of Idaho Power’s long history, and the corporation’s tradition of selling appliances to women throughout their service area, hosting well-attended cooking school demonstrations throughout the 1920s and 1930s, and the 1960’s decision to include recipes in customers’ monthly bills lent itself to writing a cookbook for distribution to current customers. Working with Idaho Power’s corporate communications team, SHRA created the historic content for the book, writing several popular history essays for the book and contributing historic imagery for visual “pop.” SHRA received the 2016 Award for Excellence in Consulting from the National Council on Public History for our work on the Idaho Power Centennial project.