This summer I traveled extensively for work, and as a result I found myself shuttling to and from the airport at odd hours of the day (and night). And while each trip was somewhat of a blur, whether it was because of catching a 6:30am flight or arriving back home well past nightfall, there was one common denominator — road construction. The gravel, reflective vests, and flashing arrows got me thinking about our country’s present infrastructure crisis and the historical practice of funding roads, bridges, and infrastructure maintenance. 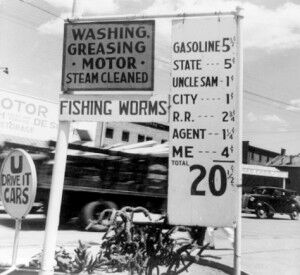 A 1930s service station breaks down the cost of gasoline. (Source)

Before I dove into the topic, the historian in me predicted that the automobile’s proliferation in the early twentieth century had likely provoked the need to secure a funding source for roads, because after all, cars used the roads almost exclusively. What surprised me, however, was that the gas tax originated at the state, not federal level. In 1919, Oregon became the first state to implement a gas tax. Within a decade, every state (48 at the time) had followed suit and established a one- or two- cent tax on each gallon of gasoline sold.[i] The economic crash of 1929 and the freefall into the Great Depression prompted U.S. President Herbert Hoover to capitalize on the innovative policy idea at the federal level. Hoover and Secretary of Treasury Ogden L. Mills pieced together what became the Revenue Act of 1932, which enacted dozens of taxes on everything from candy and chewing gum, to petroleum. For years, state and federal governments alike reaped the benefits of taxing gasoline, as it provided a significant source of revenue for funding infrastructure projects. Over the course sixty years, both states and the federal government raised gas taxes numerous times, the last federal increase occurring in 1993.[ii] But despite these increases, the gas taxes could not keep pace with inflation or the advent of higher fuel efficiency. So as the price of gas and the cost of maintaining roads and bridges have skyrocketed, gas taxes have remained stagnant, which in some instances has posed serious problems for the general public’s safety.

With summer coming to a close, this past weekend I traveled (for pleasure) to Oregon to visit my sister. This time around I wasn’t surprised to find that Oregon was once again leading the nation with a new transportation initiative to fund road maintenance. Instead of taxing gas, the state was using a new approach. In July 2015, up to 5,000 Oregonians signed up for a program that exempted them from Oregon’s gas tax. The catch was that they would instead pay a new tax based on the number of miles driven.[iii] While Oregon’s new program offers a new avenue to procure much needed funds, not all are happy with the innovation, particularly electric and hybrid car owners who find the new tax unfair. It will be interesting to see if certain hurdles surrounding Oregon’s new gas tax can be cleared and if the nation will once again follow Oregon’s lead, especially as the country grapples with the crumbling of its infrastructure.