On October 2, 1922, Aldo Leopold penned a plea for the preservation of a wilderness area in New Mexico. As a U.S. Forest Service employee stationed in the Land of Enchantment, Leopold lamented the loss of areas fit for wilderness designation that recently had been lost to the rise of automobiles. In his plea, he wrote “during the last five years the following areas which might have been suitable for the same purpose [wilderness designation] have been opened to auto travel and are no longer available. …Only two other areas remain in the Southwest that might be used, but neither is as attractive as the Gila.”[i]

Located in southwest New Mexico, the Gila Wilderness was originally home to myriad Native American peoples including the Archaic,[ii] Mogollon, and Apaches. However, Spanish explorers penetrated the Gila in search of copper mines near the start of the 19th century, mirroring other natural resource exploits across the North America at the time. As a result of Mexico’s revolution against Spain in 1821, the Gila became a part of Mexico. However, by 1854 the Gila returned to the jurisdiction of the U.S. from the Gadsen Purchase.[iii]

Leopold’s 1922 proposal became a reality less than two years later when on June 3, 1924 the U.S. Forest Service set aside 755,000 acres as the Gila Wilderness, the first “wilderness” designation in the world. Despite this milestone, it took another 40 years until Congress passed the National Wilderness Act of 1964. Alterations and changes to the Gila Wilderness have occurred since 1924. In honor of Leopold’s vision the original Gila acreage was divided and simultaneously expanded. Today the 557,873 acres of the Gila Wilderness sits adjacent to the Aldo Leopold Wilderness’ 202,016 acres.[v] 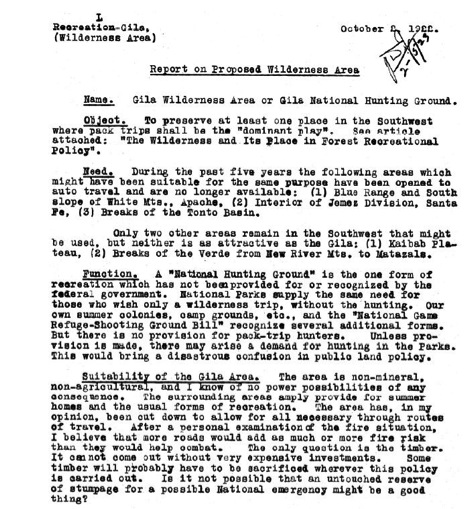 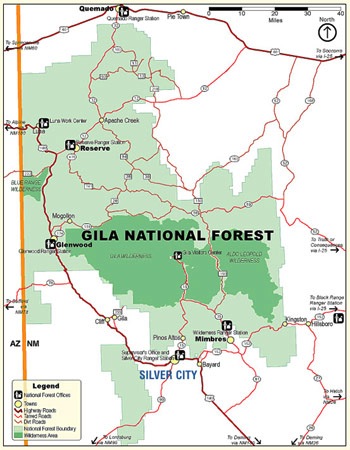 [iii] History of the Gila Wilderness,

[iv] “An Act to set apart a certain Tract of Land lying near the Head-waters of the Yellowstone River as a public Park.”

[v] History of the Gila Wilderness