10/3/14 – The Penniless Billionaire, a Legacy of Andrew Carnegie

Andrew Carnegie is famous for many things, not least of which were his many philanthropic ventures and the legacy of libraries he left across the entire United States. Recently, the British media have been carrying the story of Charles “Chuck” Feeney, an Irish-American billionaire who is making a similar effort to give away his entire personal fortune during his lifetime.  Through his foundation, The Atlantic Philanthropies, he has donated vast sums over the past three decades (the first fifteen years virtually anonymously) to projects in many countries, including the Republic of Ireland, Northern Ireland, South Africa, Vietnam and the United States.  In September 2014, it was announced that The Atlantic Philanthropies would donate more than $40 million USD to Northern Ireland; the funds are slated for programs in dementia care, early childhood education and shared education between Catholic and Protestant students.   To date, the foundation has gifted more than $6.5 billion and is scheduled to complete its mission in 2020, when Mr. Feeney is 89.

Mr. Feeney, who made his money through DFS, a duty-free shopping empire that he and a partner founded in 1960, has stated his desire to die penniless.  He has inspired other American businessmen-turned-philanthropists, including Warren Buffet and Bill Gates, to be equally magnanimous. A visit to the foundation’s website, however, reveals that Mr. Feeney himself was inspired by perhaps the greatest philanthropist in history, the 19th Scottish-American steel magnate Andrew Carnegie. 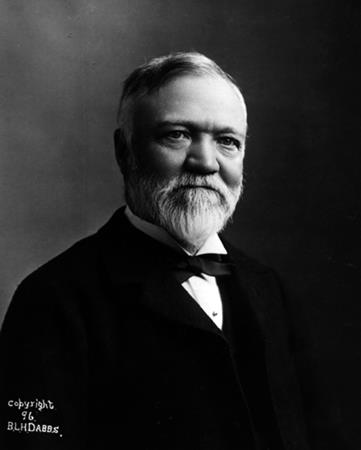 Like Mr. Feeney, Mr. Carnegie was a self-made man. As he amassed his fortune, however, he never lost sight of his impoverished roots and was deeply troubled by the growing income inequality that he witnessed during the late 19th century Industrial Revolution. He wrote:

The problem of our age is the proper administration of wealth, so that the ties of brotherhood may still bind together the rich and poor in harmonious relationship. The conditions of human life have not only been changed, but revolutionized, within the past few hundred years. In former days there was little difference between the dwelling, dress, food, and environment of the chief and those of his retainers. The Indians are to-day where civilized man then was. When visiting the Sioux, I was led to the wigwam of the chief. It was just like the others in external appearance, and even within the difference was trifling between it and those of the poorest of his braves. The contrast between the palace of the millionaire and the cottage of the laborer with us to-day measures the change which has come with civilization.

This extract is taken from Mr. Carnegie’s 1889 essay entitled “The Gospel of Wealth,” which is also known as just “Wealth.” While Carnegie’s juxtaposition of the Sioux and “civilized man” and his overt paternalism are both challenging for modern readers, the essay is nevertheless considered a classic tract on wealth and philanthropy. In it, Mr. Carnegie argued that individual wealth could and should be used for the betterment of all society.  He advocated a position whereby the wealthy, what we colloquially refer to today as “the 1%,” would use their fortunes for great public works, education, betterment of public institutions and support for arts and literature.

In the essay, Mr. Carnegie contemplated three ways of disposing of an individual’s fortune:  passing it on to one’s heirs, slating it for charitable distribution at one’s death and giving it away during one’s lifetime.  Mr. Carnegie greatly favored the third path:

There remains, then, only one mode of using great fortunes; but in this we have the true antidote for the temporary unequal distribution of wealth, the reconciliation of the rich and the poor–a reign of harmony–another ideal, differing, indeed, from that of the Communist in requiring only the further evolution of existing conditions, not the total overthrow of our civilization. It is founded upon the present most intense individualism, and the race is projected to put it in practice by degree whenever it pleases. Under its sway we shall have an ideal state, in which the surplus wealth of the few will become, in the best sense the property of the many, because administered for the common good, and this wealth, passing through the hands of the few, can be made a much more potent force for the elevation of our race than if it had been distributed in small sums to the people themselves. Even the poorest can be made to see this, and to agree that great sums gathered by some of their fellow-citizens and spent for public purposes, from which the masses reap the principal benefit, are more valuable to them than if scattered among them through the course of many years in trifling amounts.

During his lifetime, Andrew Carnegie practiced what he preached.  In today’s dollars, he amassed a fortune that approached $310 billion USD, and by some measures was the second wealthiest person to have ever lived.  He devoted his philanthropic efforts generally in the areas of the arts, education and access to knowledge. His best-known and arguably most successful project was the system of Carnegie libraries, which brought universally accessible lending libraries to more than 2,800 communities throughout the U.S. and elsewhere.

At a time when income inequality is again making headlines, it is encouraging to see that the words and deeds of America’s greatest 19th century philanthropist continue to inspire some of today’s most successful self-made billionaires to consciously distribute large portions of their great wealth to forces for the common good.

Timeline of The Atlantic Philanthropies, from here.

NPR, How Andrew Carnegie Turned His Fortune Into A Libary Legacy

Business Insider, The 20 Richest People of All Time

The Independent, Secretive ex-billionaire Chuck Feeney gives away the last of his fortune to educate Northern Irish children

BBC.COM, Chuck Feeney profile: The billionaire who is giving all his money away