This winter I had the chance to spend time in a historic part of the Adirondack Mountains of New York. Adirondack Park – the largest state-level protected area in the continental United States and the largest National Historic Landmark – covers much of northeastern Upstate New York and played an essential role in the environmental history of the United States. The park was established in 1892, around the same time that Congress designated Yellowstone and Yosemite, and Adirondack founders hoped to fulfill similar wilderness conservation ideals. But the Adirondacks are not as far removed from metropolitan areas as those western parks, and as with many areas on the east coast, the park’s proximity to a metropolitan center was one of the things that led to its conservation. What perhaps makes the Adirondacks unique is that this proximity gained the park a special place in the country’s architectural history as well as its environmental history.

With the help of railroads and steam ships, wealthy tourists from New York had been traveling to the North Country for several decades before the park was established. At first they stayed in hotels, but by the 1880s many bought land and started to build camps. Tents, lean-tos, and rustic cabins came first, but soon many of these camps had turned into elaborate compounds, and the Adirondack Great Camps were born. The wealth of these families cannot be overstated –Vanderbilts, prominent bankers, Vice-Presidents, governors, Calvin Coolidge – nor can the ornate, yet rustic architectural style that developed at the Great Camps. The camps included grandiose main buildings and extensive grounds dotted with cabins, cottages, boat houses, tennis courts, bowling allies, and even movie theaters as time went on. Calling them elaborate hardly does them justice; calling them camps borders on absurd. 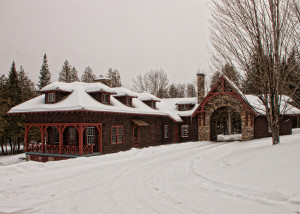 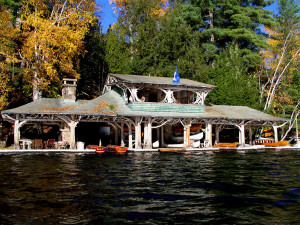 I stayed at a Great Camp this past December, for some have been turned into hotels that – thankfully – are no longer just for the wealthiest tourists. White Pine Camp is located in the St. Regis Lakes area of the Adirondacks, which, at the turn of the century, was owned by lumber baron Paul Smith. Smith sold 35 acres on Osgood Pond to Archibald White, a prominent New York banker, who commissioned architects William Massarene and Addison Mizner to build the camp. Soaring ceilings, asymmetrical roof lines, giant stone fireplaces, dramatic windows, stone archways, wrap-around porches, and a rough-milled wooden siding that became typical of Adirondack architecture are all found at White Pine Camp. Its most famous guests were the Coolidges, who used it as a summer home in 1926, hosting governors, ambassadors, and cabinet members, though rumor has it that the President’s top executive priority that summer was actually angling for bass and pike. We stayed in Mrs. Coolidge’s cabin, enjoying her excellent fireplace and view of frozen Osgood Pond, but we made sure to wander: the wooden ball return in the bowling alley still works, the boat house still holds boats, the Japanese tea house catches the mid-day sun, and the Adirondack-style rocking chairs in the warming house next to the tennis court are quite comfortable. 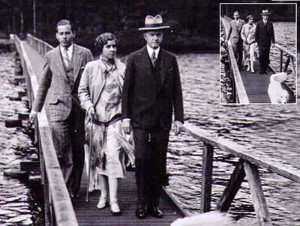 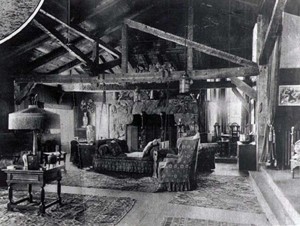 While the privilege and wealth associated with the Great Camps is hard to fathom – and while many of the camps unfortunately remain closed to the public even today – it isn’t hard to relate to the desire to escape to the Adirondacks, to return from a hike in the High Peaks to a warm fireplace, to wake up to the sun on Osgood Pond. The history of land conservation in the Adirondacks is tied to the Great Camps; we enjoy such a large, wild park in part because of those who valued the landscape’s natural beauty long before us.