We conduct a lot of research in historic trade journals here at SHRA. While some might find the task of going through a 400-page bound volume rather tedious, as historians, we have great fun from the moment the weary spine of a volume squeaks back to life until we close the massive book and plumes of dust rise and settle on our work space.

One of the thrills of trade journal research (other than finding excellent material for our clients) is coming across historic illustrations. This past week I found a drawing of an 1868 fire extinguisher. Historically, it made perfect sense that an 1860 edition of the Mining and Scientific Press would contain such an image. Fire posed a serious threat to cities, towns, mines, and factories across the United States in the 1860s, 1870s, and 1880s. Nineteenth century towns and larger municipalities were, by and large, constructed of wood with only a miniscule amount of space between buildings. In essence, these towns and cities were tinderboxes, simply awaiting a spark. Fire devastated numerous American cities, including a large swath of Chicago in 1871, Boston’s downtown in 1872, and 100 acres of Seattle’s business district in 1889. Mining towns during this era didn’t fare much better. The brutal combination of wood structures, candles, wind, and too many after-work libations ignited fires in famous mining towns throughout the West. 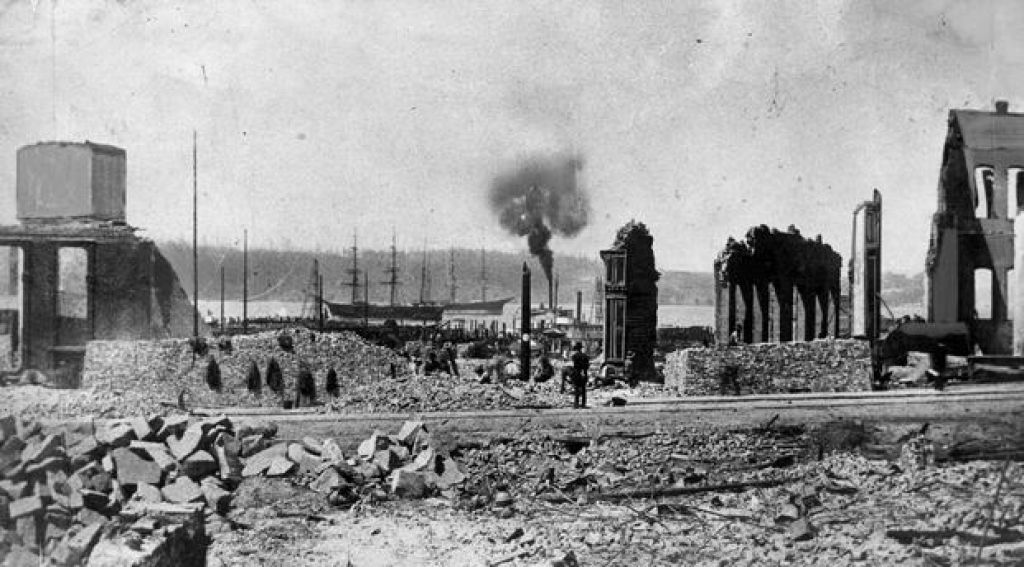 Despite what the fire extinguisher illustration suggests, fires were not easily controlled. Numerous mining towns and municipalities established their own volunteer firefighting forces by following the example of Benjamin Franklin. In 1736 Franklin founded the Philadelphia-based volunteer firefighting organization, the Union Fire Company. However, volunteer firefighting was not for the faint of heart. In addition to running into burning structures while everyone else was running out, rival crews would compete to be first on the scene to collect bonuses from local governments and insurance companies. Healthy competition eventually evolved to street brawling, and as a result, volunteer crews were replaced with professional, municipally operated fire departments.

Today’s smoke alarms, flame-resistant materials, city codes, and fire extinguishers (which thankfully have evolved from the illustration I found) all keep us much safer from the threat of domestic fire. Fortunately, the closest I get to fire is reading about it in historic trade journals.

“Benjamin Franklin, Founding Father of Firefighting,” The History Blog, May 29, 2012

L.J. Ettinger, The Best of Virginia City and the Comstock, Reno: Nevada, 1995.

Leon Neyfackh, “Plenty of Firefighters, But Where Are the Fires?” The Boston Globe, Sept. 8, 2013.