As August draws to a close, most students across the U.S. are heading back to school. We previously looked at the origins of public schools in the U.S. , and SHRA delved into more education-related issues when we researched and wrote the 120-year history of the Idaho Education Association. Because most Americans are a product of the public school system, we probably all consider ourselves “experts” on public education and its structure, even without any expanded historical knowledge. But have you ever wondered why we have a three-month summer break? Ideas that jump to mind immediately include links to our agrarian past; or that kids need time to relax and rejuvenate; or that, before air-conditioning, schooling during summer months would be torturous. But are any of these true? Let’s take a closer look.

The now familiar academic calendar dates to a larger 19th century reform movement to homogenize and create free, universally accessible public education, which was still a pipe dream in most areas. In essence, reformers at that time were trying to standardize curricula, improve teacher standards, and require attendance around the nation. 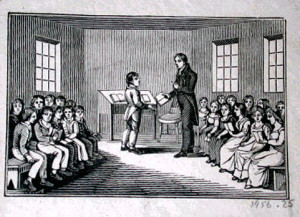 Although the summer vacation is more or less fixed today, urban and rural schools used to run on very different calendars. Before standardization efforts, most urban schools ran year-round but were often poorly attended because attendance was not compulsory.  Other factors, such as sweltering conditions prior to the invention of air-conditioning, the fact that many wealthy urban families spent their summers away from home in cooler locales, and that less-experienced teachers often taught summer sessions also contributed to poor attendance during the summer months. In contrast, rural schools generally took two extended breaks – one in the spring, for planting, and the second, in the fall, to accommodate the harvest. 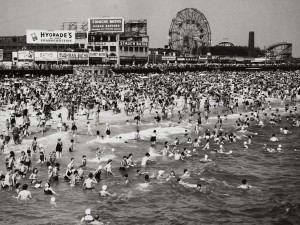 New Yorkers enjoying summer on Coney Island circa 1947. From here.

Administrators and reformers (in both types of districts) were looking for ways to maximize and improve their educational resources. They thought it would be best to shrink the number of school days and require attendance. Additionally, in the early years of our country, most teachers did not have formal training. Extended breaks allowed for teachers to obtain additional education and to prepare for the upcoming academic year. Due to the relative political strength of urban residents and the aforementioned summer climate challenges and related health concerns, reformers opted to following the urban schools’ lead and shuttered public schools during the summer months.

Most U.S. jurisdictions now provide roughly 180 days of instruction in a complete school year, with an extended break that runs from shortly after Memorial Day, the last Monday in May, to approximately Labor Day, the first Monday in September. While it is true that decades ago doctors theorized that giving students a period of rest and recuperation from their studies would be beneficial, in fact most data now shows that the extended summer break sets students back in their achievements. Many modern parents also face challenges in how to occupy and care for their school-age children during the long absence from the classroom.

A family hike in Yellowstone National Park. From here.

Nonetheless, the summer break has now become as American as apple pie. Changing the school calendar is frequently discussed, but the notion has gained little traction of late, even as modern educational reform initiatives like No Child Left Behind and the Common Core seek to improve school performance and student achievement.