SHRA » Blog » Features » 9/12/14 – From Clearcuts to Ecosystem Management: The Forest Service and the Environmental Movement

9/12/14 – From Clearcuts to Ecosystem Management: The Forest Service and the Environmental Movement

Editor’s note: This is the fourth installment in a blog series on the history of the national forests by SHRA environmental analyst/researcher Naomi Heindel. Links to the previous blogs in the series are here, here, and here. This installment examines the rise of the environmental movement, the Forest Service’s continued reliance on clearcutting, and the conflicts – and improved forest management practices – that resulted.

At the end of my previous blog on the Forest Service, I alluded to the fact that the nascent environmental movement of the 1960s and 1970s did not erase the conflicts that had come to define the agency and the forests it managed. Instead, as the Forest Service continued to prioritize timber harvesting above all other uses, the lines between interest groups grew stronger. Despite increasing environmental protections, some of the agency’s most destructive land management practices came to characterize this era, making these decades some of the Forest Service’s most unpopular years. It was not until the late 1990s and early 2000s that the Forest Service fell into step with ecologically sound forest management practices by yet another redefinition of “the greatest good.” Yet lawsuits filed just last week over the Big Thorne old-growth timber sale in the Tongass National Forest[i] and heated debates over salvage logging after the 2013 Rim Fire in the Stanislaus National Forest[ii] prove that controversy is still never far off.

In the 1950s, just as citizen interest in outdoor recreation resulted in pressure on the Forest Service to harvest less and conserve more, the demands of a post-war construction and housing boom pushed the agency in the opposite direction. Throughout this period, the agency’s goal was to increase timber yield from national forests every year, and to do so the Forest Service began clearcutting like it never had before. The practice of clearcutting converted forests that previously had a mix of old growth trees, young saplings, and everything in between into forests that resembled plantations – all the trees were the same age. As a result, forests lost the structural and habitat diversity gained by the co-existence of old stumps and young saplings. Clearcutting also meant that the Forest Service could increase timber yield by shortening the forests’ turnover time and harvesting trees every 60 to 80 years instead of every 150 years. “Get the cut out”[iii] was the phrase used to describe this new mentality.

Yet “get the cut out” represented a sharp contrast to the agency’s continued mission of multiple-use management. To pull off an illusion of multiple-use management during this time, the Forest Service emphasized the favored public uses that received a boost from clearcutting: big game hunting, roads, and better access for the general public. The agency deflected public criticism by leaving buffers called “beauty strips”[iv] on the roadsides to mask clearcutting from public view, zoning national forests by use, and criticizing private industry for their clearcutting in the Northwest, all of which allowed the public to think that the agency itself still maintained its decades-long opposition to the practice. But behind the buffers, James G. Lewis writes in his centennial book, the Forest Service “had embraced clearcutting” and had “completely reversed its position on timber management.”[v] 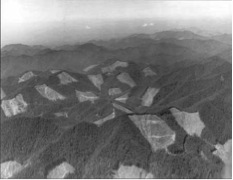 Not surprisingly, increased timber yields from national forests were met with increased opposition from environmentalist groups such as the Sierra Club and the Wilderness Society. Yet when multiple-use management became law through the Multiple-Use Sustained Yield Act of 1960, the law was silent on the subject of balancing forest uses or incorporating new ecological and environmental values into forest management. Instead, Congress and the White House continued to push the agency to increase yields and only funded Forest Service activities that related to timber. Under this economic and political pressure, timber remained paramount and spread eastward into the hardwood forests, where regrowth took much longer and where there was even stronger opposition.

Years of heavy clearcutting, however, found the Forest Service out of touch with its public just a few years later. Cultural shifts accelerated in 1962, when Silent Spring criticized federal agencies, including the Forest Service, for their chemical use. At the time, the Forest Service was using DDT on at least one million acres of forest per year and relied on pesticides and herbicides to generate its high timber yield. Much of the landmark environmental legislation that followed these discoveries seemed to be aimed directly at the Forest Service. The Wilderness Act of 1964 designated nine million acres of national forest as wilderness, prohibiting logging and motorized vehicles (though water resource development, mining, and grazing were still allowed). After years of buildup and a major environmental catastrophe off the Santa Barbara coastline, Congress intended the National Environmental Policy Act of 1970 to increase the influence of science in land management, requiring, for example, that logging’s effects on erosion and thus on fish habitat be taken into consideration when making permit decisions. The Endangered Species Act of 1973 was especially significant in its effects on national forest management, for it expressly protected habitats, rather than species. It was clear that the American public gradually had lost trust in the Forest Service and questioned its ability to manage public land for the future.

Despite these major shifts in public thinking, the Nixon administration and U.S. representatives from timber states threatened to cut the Forest Service’s budget entirely if it did not harvest an ever-increasing amount of timber, and in fact urged the Forest Service to cut twice as much in old-growth forests. The resulting clearcuts, especially in the Bitterroot National Forest in Montana and the Monongahela National Forest in West Virginia, incited a new level of public criticism, scathing scientific reports, and several lawsuits against the Forest Service. Change finally began in 1976 with passage of the National Forest Management Act (NFMA), which introduced broad policies to ensure that viable populations of native wildlife could survive in national forests. Perhaps most importantly, the agency hired scientists from many fields – biology, hydrology, soil science – to fulfill this requirement, marking another distinct change in the Forest Service’s history.

The necessity of long-term planning was likely the most significant change brought about by NFMA and the other environmental protection acts. Administrators were required to draft forest management plans, incorporate public opinion, and consult other governmental agencies. This was not a smooth transition for the agency, for the public continued to think the Forest Service was driven only by timber profit while the Forest Service continued to feel battered around by the public and at odds with other agencies like the Fish and Wildlife Service. It didn’t help that harvests continued to increase through the 1980s; in 1987, the Forest Service harvested 14 million board feet, its largest harvest ever. The strongest call for change eventually came from within the Forest Service itself, and, under the leadership of Forest Chief F. Dale Robertson, a new system of forest management was adopted called ecosystem management. With ecosystem management, the Forest Service redefined the greatest good once more, but this time “it turned to the land itself for clues.”[vi] 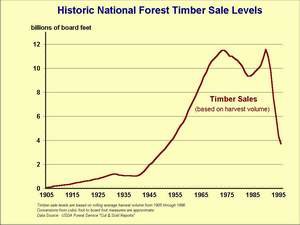 In the spirit of Aldo Leopold’s “Land Ethic,” which affirmed the rights of the soil, water, plant, and animal communities, ecosystem management expanded the definition of “the greatest number” beyond humans. As Lewis put it, for decades the practical conservationists, sentimental preservationists, and intellectual ecologists had been battling it out. The land ethic combined all three perspectives, and ecosystem management had to do the same. This meant big changes, such as acknowledging the interconnections of ecosystems when it came to things like soil, fungus, and debris. It meant increased research at the Forest Service, and thinking about things at the landscape and ecosystem scale. It took time to implement this new approach – clearcutting remained the agency’s default harvesting system until 1992 – but slowly the Forest Service began to manage the national forests for both productivity and diversity. It also took time for the forests to grow back and for the natural complexity of the nation’s forests to return.

By the late 1990s, the Forest Service’s focus had shifted so much that it defined the greatest good not by what was taken out of the forest, but by what was left in place. Though today some environmentalists and conservation scientists see an ongoing reliance on timber revenues when they look at recent Forest Service decisions, such as those permitting logging in the Tongass and Stanislaus National Forests, the overall harvest from national forests has decreased by 84% since its peak in 1987. By 2001, timber harvests on national forests accounted for only 2% of the nation’s total timber harvest, just as they did prior to World War II. This does not mean that current lawsuits seeking to protect old-growth forests, fisheries, recreation, and threatened or endangered species such as the Tongass’ Alexander Archipelago Wolf are without cause. In fact, these conflicts could very well reshape the Forest Service’s definition of “the greatest good” yet again. The Forest Service has clearly established that an expansive, flexible, ever-changing definition of “the greatest good” – one that allows for debate, multiple and competing uses, public involvement, and new scientific understandings – is best for the land in the long run.

In the early 2000s, Forest Chief Dale Bosworth identified the agency’s “four threats,” issues which will sound familiar to anyone living near a national forest today: fire and fuels, invasive species, loss of open space, and unmanaged outdoor recreation.[vii] These are the debates of today; these are the controversies that still permeate the lecture halls and field trips at the Yale School of Forestry. And ultimately, these ongoing conflicts and conversations are not discouraging, but rather are our forests’ greatest hope.